Decent work is the ILO's primary goal for everyone, including persons with disabilities. The ILO has worked for over 50 years to promote skills development and employment opportunities for people with disabilities based on the principles of equal opportunity, equal treatment, mainstreaming into vocational rehabilitation.

In 2011, six UN agencies (ILO, WHO, UNDP, OHCHR, UNICEF, and UNDESA) established the UN Partnership on the Rights of Persons with Disabilities (UNPRPD) – a multi-donor trust fund (MDTF) to support collaboration between UN agencies in country-level programmes to promote the rights and opportunities for persons with disabilities. The goal of the UNPRPD is to develop the capacities of national stakeholders, particularly governments and organizations of persons with disabilities, for the effective implementation of the UN Convention on the Rights of Persons with Disabilities (UNCRPD). One of the first implementing countries of the UNPRPD is Indonesia. The programme has also promoted the inclusion of persons with disabilities alongside non-disabled people in programmes and services relating to employment promotion and economic and social development.

With the ratification of the UN Convention on the Rights of Persons with Disabilities (UNCRPD) in 2011 by the Indonesian government, in which it was adopted into the Act of The Republic of Indonesia No. 19/2011, the new national law on Persons with Disabilities was recently enacted under National Law No. 8/2016. The current law substitutes the former law on Handicapped People under National Law No. 4/1997. The most salient element of the law is how it sees the rights of persons with disabilities as inseparable from the equal rights of all members of the human family as defined in the UNCRPD.

One of the main outcomes is to pursue the development of Network of Mayors for Inclusive Cities as an active, purpose-driven, self-sustaining coalition to promote and spread the policies that advance the rights of people with disabilities.

The primary output in achieving the Network of Mayors is the awareness raising of municipal officials and disabled person organizations (DPOs) on UNCRPD and the available evidence-based policy solutions emphasizing the rights and needs of women and girls with disabilities in particular.

The awareness raising will be in a form of focus group discussions (FGDs) that aim to open discussion between the local government and DPOs as well as enhance awareness of the rights and needs of women and men with disabilities. Equal participation between female and male participants shall be ensured throughout all sessions. 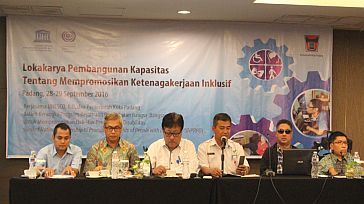 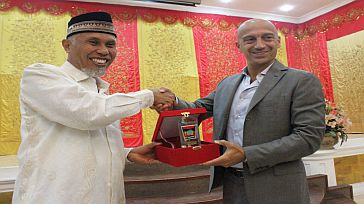 More cities committed to be inclusive cities in Indonesia