PESHAWAR (ILO News): Awareness raising among intending migrant workers, better coordination between stak eholder institutions, and effective implementation of emigration laws to minimize the role of intermediaries/sub-agents in the recruitment process of Overseas Pakistanis can help in reducing possible exploitation of intending migrant workers from Pakistan. This was concluded in the Policy Dialogue on promoting fair recruitment practices for labour migration on 11 November 2021 at Peshawar.

While opening the Dialogue, the ILO Country Director, Ms Ingrid Christensen emphasised the importance to promote safe and fair recruitment practices for the intending migrant workers. She emphasized that foreign employment workers should be protected along with their families as envisaged in the draft Emigration and Welfare Policy.

Mr Farrukh Jamal, Director-Research BE&OE, made a detailed presentation on functions of Bureau and the recruitment process – highlighting major checks to reduce exploitation.

Mr Razim Khan, Representative, Pakistan Workers Federation (PWF) shared that intending migrant workers face lots of social and financial challenges when they are seeking foreign employment. Sometimes they face exploitative practices, and the agents charge heavy fees from them. Despite paying heavy fees, they do not get the assistance they require. There is a need to raise awareness on the foreign employment recruitment process. He emphasized that the intending migrant workers should contact authorized Overseas Employment Promotors. Besides that, he mentioned the need to promote good recruiters to showcase fair recruitment practices.

The Representative of the Pakistan Overseas Employment Promotors Association (POEPA), Mr Qaiser Ali, highlighted the role of sub agents/intermediaries in recruitment process. He said that role of subagents can be gradually reduced in recruitment process through awareness. We need to work to reduce the role of sub-agents who are working in receiving countries. He referred to their promotion of unfair practices, and requested the Government of Pakistan to take initiatives to reduce those challenges. Furthermore, he called for better facilitation of Overseas Employment Promotors (OEPs) so as to provide for them to be involved in the entire process.

Mr Irfan Ullah Khan, Director, Department of Labour KP highlighted the issues of foreign employment migrants. Pakistan is one of the countries who receive large amounts of remittances from two major sources; exports and migrants who send remittances to Pakistan. Government of Pakistan often introduces packages for exporters but there is a dire need to work on welfare and protection of foreign migrant workers. He said in recruitment process different actors are involved who are practicing both fair and malign practices. Those actors extend their services through agents/intermediaries. Their malign practices give bad representation to Pakistan in recipient countries; therefore, there is a need to address the issues of foreign employment migrants. A focus on good skill courses to the future intended foreign migrants because of the increased demand for skilled workers abroad. This will increase country’s remittances and also benefit the foreign employment workers to gain good remunerations in foreign competitive markets.

The ILO-REFRAME project, conducted research on “Recruitment agency business practices and role of intermediaries in the foreign employment industry in Pakistan”, which reaffirmed the vital role of informal channels such as friends and relatives plays in the growth and expansion of overseas migration. The study brought together set of recommendations shared with the delegates.

The ILO Country Office for Pakistan, with support of the European Union (EU), is implementing the project titled “Global Action to Improve the Recruitment Framework of Labour Migration” (REFRAME) with the ultimate aim of reducing abusive practices and violations of human and labour rights during the recruitment process and maximizing the protection of migrant workers in the recruitment process and their contribution to development. Correspondingly, Governance of Labour Migration in South and South-East Asia (GOALS)” is a Joint Regional Programme between the International Organisation for Migration (IOM), International Labour Organisation (ILO), and The United Nations Entity for Gender Equality and the Empowerment of Women (UN Women). Supported by the Swiss Agency for Development and Cooperation (SDC). 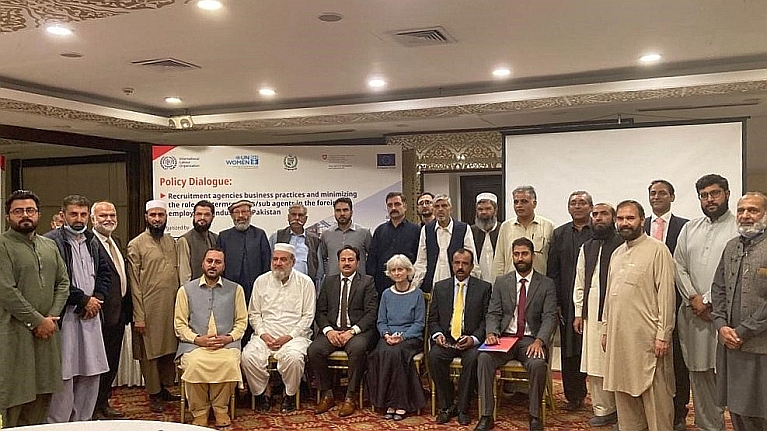