LAHORE (ILO News): The International Labour Organization (ILO) in collaboration with the Federal Ministry of Overseas Pakistanis and Human Resource Development MoOPHRD) organized a tri-partite consultation workshop to contribute to greater understanding of the core international labour standards (ILS). The workshop was organized within the framework of projects on Labour Standards financed by the European Union. The Standards discussed at the workshop, which was held in Lahore 17-19 April, concerned Child Labour, Forced Labour, Freedom of Association/Collective Bargaining & Non-Discrimination and Equality in Employment and Occupation.

The workshop aimed at creating awareness about ILO’s Labour Standard setting processes and supervisory systems and helped the Provincial Tripartite Consultative Committee (PTCC) members from Punjab, Khyber Pakhtunkhwa, Azad Jammu and Kashmir, and representatives from Gilgit Baltistan and the Islamabad Capital Territory to continue discussing the legal, institutional and administrative reforms required for strengthening the labour market governance in the country. The workshop was attended by more than 30 participants. It was the third of its kind, following an earlier Consultation in Islamabad on 17-18 January 2017 in which the Provinces presented their progress and flagged the issues relevant to labour legislation and the corresponding enforcement of labour laws and a workshop in Karachi 8-10 February, wherein the PTCCs from Sindh and Baluchistan participated.

Mr Suhail Aamir, Federal Secretary, Ministry of OPHRD, while speaking at the inaugural session of the workshop welcomed the ILO’s support, saying that “these workshops are providing opportunity to federal and provincial governments to analyse labour market governance and plan improvements with reference to the core ILO Conventions and related labour laws regime in Pakistan. This is important for the country, particularly in terms of sustaining the increased economic gains from the Generalised System of Preferences Plus (GSP+) which allows increased access of several eligible categories of Pakistani products through incentives of duty-free exports to EU markets from 1st January 2014 for ten years term. The scheme is conditional upon Pakistan to ensure compliance with 27 International Treaties on human and labour rights, governance, and environment; including the eight Core Labour Standards.

Mr Majyd Aziz, President, Employers Federation of Pakistan emphasised the need for bettering the compliance and reporting of Core Labour Standards as a matter of priority, besides the fiscal and energy reforms that are required for Pakistan’s potential increase of export and especially continuity of GSP+, which hinges on the effective compliance of the core labour standards.

Mr Zahoor Awan, General Secretary, Pakistan Workers Federation, while speaking at the occasion, called on the provincial and national governments to urgently bring labour legislation in conformity with ILS. Moreover, the governments have to adopt necessary measures to strengthen institutional mechanisms to effectively address violation of workers’ rights and implement labour laws to arrest widening gaps in establishing decent work.

ILO’s Country Director, Ms Ingrid Christensen, welcomed the participants and re-affirmed that ILO would keep supporting the federal and provincial governments and social partners in their journey towards fostering decent work and as part of this, bettering the labour market governance. She also hinted that the outcome of these provincial workshops would be presented at a roundtable conference in Islamabad and from there it would feed into a national Labour Protection Framework that MOPHRD is taking the lead on with technical support from ILO. 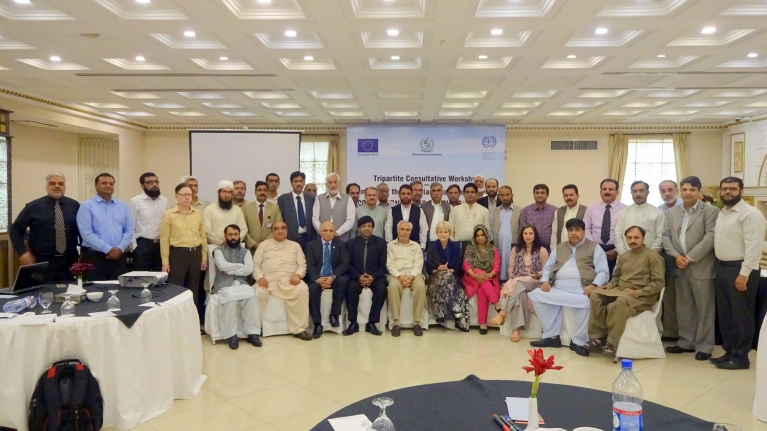