According to project plan, workshops on project introduction and communes selection had been successfully conducted with the participation of representatives from provincial and district departments, sectors, organizations and associations from An Giang and Ha Noi. The workshops were co-chaired by Mr. Dang Hoa Nam, Director of Bureau of Child Care and Protection, Mr. Minoru Ogasawara, ENHANCE Child Technical Adviser, Madam Dang Thi Hoa Ray, Director of An Giang Department of Labour, Invalid and Social Welfare (in An Giang workshop) and Mr. Dang Van Bat, Vice Director of Ha Noi Department of Labour, Invalid and Social Welfare (in Ha Noi workshop). 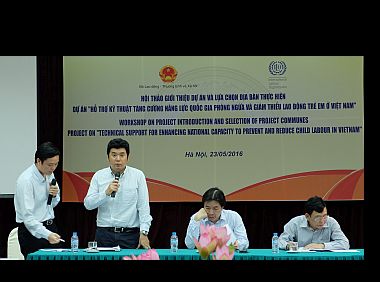 Participants discussed about issues relating to Child Labour in An Giang and Ha Noi such as: root causes of child labour, sectors/ economic activities that involving child labour, intervention to prevent child labour, criteria for commune selection.  Prior to these workshop, the mission team from ILO and MOLISA had conducted field visits and meet with  local stakeholders (District People’s Committee, District Labour Office, District Education & Training Office, and District Statistics Office) in An Phu, Chau Doc, Chau Phu and Cho Moi (An Giang); and Thach That, Chuong My, Gia Lam and Hoai Duc (Ha Noi).

ENHANCE’s overall development objective is to build a comprehensive and efficient multi-stakeholder response for the prevention and reduction of child labour in Viet Nam, building capacity of national institutions and stakeholders to identify, monitor and respond to child labour, raising awareness on child labour, the associated hazards and prohibition against it; developing intervention models for preventing and withdrawing child labour in selected geographical areas. 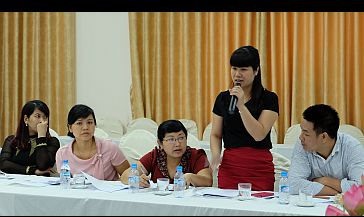 District participant contributed at the workshop

Based on field trip findings and discussion at the workshop, participants agreed on the list of commune to conduct the Project Baseline survey and project implementation. ENHANCE project timeline is from 2016 to 2019, project direct interventions will be implemented in Ha Noi, HCM city and An Giang. It is expected that the project will support at least 5,000 children who are child labour or at risk.