HANOI (ILO News) – The Programme on the Prevention and Reduction of Child Labour for the 2016-20 period was officially launched in Hanoi in a two-day workshop starting on 1 December to step up the fight against child labour in Viet Nam.


The programme, which was developed by the Ministry of Labour, Invalids and Social Affairs (MoLISA) with the support of the ILO and UNICEF, aims to enhance capacity and awareness of the authorities, employers, communities, parents and children themselves to tackle child labour, as well as to provide direct interventions to children identified as child labourers.

“The approval of the Programme showed the political determination of the Party and the State of Viet Nam for a better future for the children,” she added.

According to the 2012 National Child Labour Survey conducted by the General Statistics Office, MoLISA and the ILO, Viet Nam has 1.75 million children and minors from 5 to 17 of age engaged in child labour, accounting for 9.6 per cent of child population.

Meanwhile, the latest ILO global report shows that 168 million children are in child labour around the world and about half of them in hazardous work and other worst forms.

“While challenges are there, we can be optimistic about the future, as Viet Nam has shown its strong commitment to combating child labour, through its Constitution, the ratification of two core conventions of ILO on child labour – Convention 138 and 182, and also Convention 29 on forced or compulsory labour.” ILO Viet Nam Director Chang-Hee Lee said.

“The ILO appreciates the Vietnamese Government’s important step forward of issuing the Programme on the Prevention and Reduction of Child Labour for the 2016-20 period. We will always be by the side of our Vietnamese partners in the promoting the effective implementation of the programme.”

The event, which was co-organized by MoLISA, the ILO and the UNICEF, introduced the Alliance 8.7 in Viet Nam – a partnership-led initiative to join forces globally to end child labour, forced labour, modern slavery and human trafficking.

The workshop also built capacity of the concerned partners and the programme’s key implementing agencies in 15 cities and provinces across the country in formulating local implementation, monitoring and evaluation plan to prevent and reduce child labour.

There were more than 150 participants attending the workshop, including policy makers, representatives of the National Assembly, concerned ministries, academic and research institutions, workers’ and employers’ organizations, bilateral and UN organizations, NGOs and the media, together with the programme’s key implementing agencies at local level. 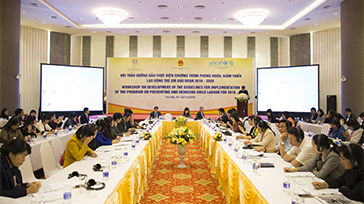