There have been lots of discussions on international labour standards these days during trade negotiations. Can you talk about possible benefits for countries, including Viet Nam, when adopting these standards in the integration process?

International labour standards (ILS) are conventions negotiated at international level, by Governments, employers and workers globally, to say what minimum standards that should be applied in all countries so that some countries don’t compete against each other with very low wages and abused conditions. During regional and global integration, ILS have become a reference point in many negotiations for integration agreements. For example, the EU makes the reference to the ILSs, especially some basic core standards and they want other trade partners to adopt them. In Trans-Pacific Partnership (TPP), there is a labour chapter and all the countries in TPP should adopt and implement the basic ILS. So if Viet Nam wants to integrate fully to the global economy to take advantage of opportunities from global integration, it needs to be aware of and gradually conform with the ILS because they are the reference point which is asked by the trade partners.

Viet Nam is one of a few countries where the ILO has chosen to focus resources to improve compliance issues. Why is that?

The ILO, as any organization, has had to concentrate our efforts and resources on some critical priority areas that are important in many countries. For our current 2014-2015 programme, one of the priorities is compliance with labour laws. In order to be able to make important progress and to create examples, we chose three pilot countries, including Viet Nam to work with. Why Viet Nam? We saw that the Government has already made a strong commitment to building up the labour inspection, which laid a strong foundation, whereas there were still many workplaces that are not compliant with labour laws. So Viet Nam is a perfect example of a lower middle-income country that is taking many steps to achieve workplace compliance.

With the political will of the Government to achieve greater compliance with labour laws and improve labour inspection, Viet Nam would be a good partner for a pilot country, to make an example of how big steps can be taken in a short period of time if there is a good strategy.

In this context, how can Better Work improve compliance? What are the lessons learned from other countries?

Better Work is one of our flagship programmes that we are very proud of. Since its start 13 years ago, now it has expanded to seven countries. Better Work operates by monitoring the compliance in garment factories. In Vietnam, we have also expanded to footwear sector.

So in the factories where Better Work is monitoring and helping, we see improvements in compliance. However, we have found out that we will achieve more compliance in the workplace if the results of that monitoring process are disclosed to the public, instead of only the buyers. So from 2015, we have a new public disclosure policy in Better Work Vietnam and all Better Work countries so that the most important issues of compliance, such as wages, occupational safety and health, will be reported transparently on the internet for everyone.

What is the role of labour inspection in promoting compliance?

Labour inspection has a very important role. Once the government sets the rules on what is required, the employers have a legal obligation to observe those rules and to comply with them. However, not all the employers may take up that responsibility. That’s why we need labour inspectors. They can identify problems, then have the role to educate the employers about their responsibilities. If, violations still exist after explanation, the labour inspectors must enforce the law and apply sanctions if necessary.

The ILO suggest that labour inspectors take a strategic approach and use your resources wisely by going to those factories and firms that have reputation for violating the laws.

In 2000, the global community at the United Nations decided to establish millennium development goals to set specific goals for the community for the development between 2000 and 2015.s We are coming to the end of that and Viet Nam is on track to meet most of the important goals.

Now the global community is beginning its debate on what we should do for the next 15 years between 2015 and 2030? We believe that one of the goals has to be to create enough decent work, enough good job opportunities for everybody who can work, for everybody who wants to work. In the millennium development goals, employment was not there, and that was the problem because the best way for households to escape poverty is to get a good job. 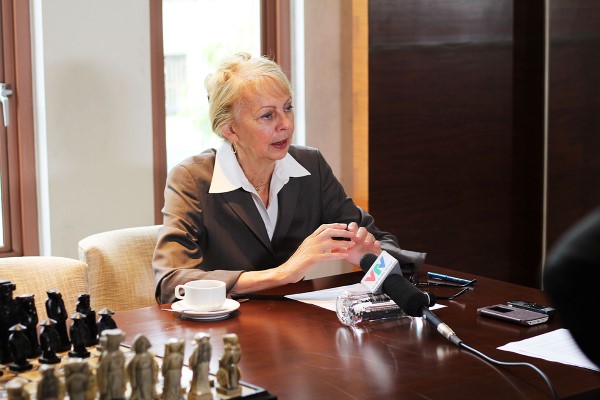