Conducted in 2015 by the General Statistics Office (GSO) with the support of the International Labour Organization (ILO), the recently-released survey showed a strong correlation between the levels of educational attainment of a young person’s labour market transition. Those educated at general secondary education level needed a much longer time – an average of 17.8 months to complete the transition from school to a first stable or satisfactory job.

The survey results also indicated that 26 per cent of young working people were overeducated for their job. At the same time, undereducation among young workers remained a problem in the country, impacting 23.5 per cent of them.

“This means that businesses are neither fully utilizing the productive capacity of many young workers nor operating at their full productivity level by employing less productive workers,” said ILO Viet Nam Director Chang-Hee Lee. “Skills mismatch can impose costs on individuals, enterprises and society at large.”

According to the survey results, almost two thirds of young students in 2015 stated a preference for work in the Government or public sector most likely due to the perception of job security offered.

Meanwhile, for young people with a job, low quality employment remains a strong hindrance to the country’s productive transformation.

Although a majority of young workers (58.6 per cent) were in paid employment, more than one third remained in vulnerable jobs as own-account workers or unpaid family workers, and nearly half of those in paid employment did not have a written contract.

Four out of five young workers were also in informal employment, referring to those jobs that generally lack basic social and legal protection or employment benefits.

“While Viet Nam does not experience alarming high youth unemployment as in many other countries, ensuring quality jobs for the young generation remains a great test for the nation,” said the ILO Viet Nam Director. “Many young workers are still stuck with no protection in the workplace and many others cannot get the right tools out of their schooling for today’s job market.”

He called on the country to increase co-operation among the Government, trade unions and businesses to boost youth employment and entrepreneurship with the private sector being a key driver of job creations.

The School-to-work transition survey was carried out in 53 countries between 2012 and 2016, with two rounds in certain countries. In Viet Nam, the first round was conducted in 2012-2013 with the sample size of more than 2,700 young people, followed by the second round in 2015 with more than 2,200 samples.

The activity was part of the Work4Youth project, a partnership between the ILO and The MasterCard Foundation, aiming to produce more and better labour market information specific to young people in developing countries focusing in particular on transition paths to the labour market. 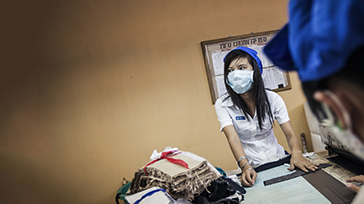