HANOI – A priority on improving skills of the workforce is important as Viet Nam deals with the changing nature of work in the era of technology when many low-skilled workers will be at risk of automation.

This is part of the answer to the big question of “how Viet Nam will address changing technologies and skills needs in the labour market” – the theme of first National Policy Dialogue on Future of Work organized on 13 December in Hanoi by the Ministry of Labour, Invalids and Social Affairs (MoLISA) and the International Labour Organization (ILO).

“In order to better the demand for jobs of workers, annually, the economy needs to create roughly 650 thousand jobs and the structural change of labour will be one of the feasible ways to increase labour productivity,” she added.

Two of the country’s major and growing production sectors – textile, clothing and footwear (TCF) and electronic and electrical products (E&E) – were at the heart of the debate.

A recent ILO study entitled “ASEAN in transformation – How technology is changing jobs and enterprises” shows that 86 per cent of Viet Nam’ TCF workers could face a high risk of automation whereas about three quarters of wage workers in E&E sector could be replaced by robots in the coming decades.

These are the country’s key exports, accounting for around 40 per cent of the total manufacturing jobs. However, TCF manufacturing is predominantly characterized by labour intensive and low-skilled production. Productivity gap in this sector is alarmingly low – only 20 per cent of the level in Thailand and nearly the same as in Cambodia.

However, The ILO study indicates that Viet Nam has not yet witnessed the impact of technology in the workplace to the same degree as some of its more advanced ASEAN neighbours as the country still has competitive labour costs and relatively high technology investment costs.

“But the question is not “if” but “when”,” said ILO Deputy Director for Asia and the Pacific, David Lamotte. “It will certainly shift in the coming years as technology costs decline while labour costs increase.”

Encouraging the young generations to follow academic pursuits in science, technology, engineering and mathematics should be a priority as these scientific disciplines are commonly sought after by employers in manufacturing.

“This is important, particularly among girls and young women who are more susceptible to job loss than men when automation becomes more popular in manufacturing industries,” said Lamotte.

Initial findings of the a recent survey by the Institute of Labour Sciences and Social Affairs (ILSSA) also show that the skills needs include both technical skills and core competencies such as creativity, foreign languages, teamwork and problem solving. However, according to the study entitled “Skills needs in new technology era: Electronics and garment sectors”, core skills are more critical as rated by enterprises. Technical skills could be attained through workplace trainings by businesses but core skills often need a long education process to deliver.

Nearly half of the surveyed enterprises in Viet Nam do not have any skills needs forecast for the future.

Meanwhile the current link between businesses and training institutes is mainly in the form of internship offered by enterprises whereas the co-operation remains weak in the development of training curriculum and materials, and planning for skilled workers training. Of the surveyed firms, 38 per cent said they have never had such co-operation.

Skills mismatch is also pointed out by the Viet Nam Chamber of Commerce and Industry’s new Labour market trend report entitled “Viet Nam in transition: Skills and productivity in the labour market” which was introduced at the policy dialogue.

According to the report, domestic enterprises rate Viet Nam’s general and vocational education quality more positively than foreign firms which find it relatively more difficult to identify and recruit workers, particularly for technical and management jobs.

The report prioritizes strategic action points namely improving labour market mobility, enhancing workforce quality, improving general education and vocational training, building links between schools and colleges and local employers, and strengthening workplace relations. “In dealing with the changing nature of work, of course we can be passive and take the future as it comes – the good and the bad. Or as the ILO believes, we can be proactive and create the future we want,” said the ILO Deputy Regional Director.

*The event was organized partly under the framework of “More and better jobs through socially responsible labour practices in Viet Nam” project. 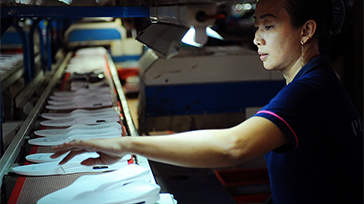