HANOI (ILO News) – The agenda of social dialogue, productivity and working conditions is becoming more important than ever as Viet Nam is entering a new era of deeper global integration.

This is the main message of a conference jointly organized by the State Secretariat for Economic Affairs of Switzerland (SECO), the International Labour Organization (ILO) and the Ministry of Labour, Invalids and Social Affairs (MoLISA) today in Hanoi.

A high ranking Swiss tripartite delegation (including representatives of the Government, employers and workers’ organizations) under the lead of Swiss State Secretary and Head of Labour Directorate Boris Zürcher attended the conference, which offered an opportunity for them to better understand the Vietnamese labour market and share relevant experiences from Switzerland.

“Within a generation, Viet Nam has transformed itself from one of the most isolated economies to one of the most connected ones, through various free trade agreements,” said ILO Viet Nam Director Chang-Hee Lee.

While acknowledging the benefits the open economy can offer in terms of investment, opportunities in the global markets and job creation, he warned of the risks accompanied, as enterprises face tougher competitions, and workers and their families are exposed to the volatility of global market forces.

“For an open economy to remain competitive while ensuring stable livelihood for its working population, it requires an environment for sustainable enterprise development, and also resilient labour market institutions to mitigate negative impacts of external shocks on the lives of working women and men,” he said.

The Trans-Pacific Partnership (TPP) and EU-Viet Nam Free Trade Agreement (EVFTA), to which Viet Nam is a party of, requires Labour Code and industrial relations reform in respect of the 1998 ILO Declaration on Fundamental Principles and Rights at Work.

“It is a challenge,” said the ILO Viet Nam Director.

Other concerns include the middle income trap that Viet Nam has been warned about – the country may not be able to move beyond labour intensive manufacturing, with little added values and low wages for unskilled workforce.

“Given that context, strengthening social dialogue, enhancing productivity and improving working conditions are critically important to respond to the requirements of globalized production processes, and ultimately to contribute to sustainable and inclusive economic growth,” said Swiss Ambassador to Viet Nam Beatrice Maser Mallor.

The Head of Swiss Labor Directorate Boris Zürcher agreed, adding that “The experience from Switzerland shows that strong social dialogue is essential for the prosperity of a country. Together, workers’ and employers’ organizations find tailored solutions to improve working conditions, increase productivity and assure the competitiveness of the economy.”

According to MoLISA Vice Minister Doan Mau Diep, this is “the right time” for the Government, together with ILO, business communities, workers’ organizations and other partners to review the country’s legal and institutional framework to improve productivity and working conditions, and to design and implement more effective policies in this area.

Improving working conditions is an investment, not a cost

But Viet Nam won’t have to start from the scratch as it has already gained positive experience from ILO flagship programmes funded by the Government of Switzerland and other donors.

Better Work Viet Nam programme, which covers more than 20 per cent of the country’s total garment workforce, has brought considerable improvements in working conditions in apparel factories while boosting their business performance through better compliance with national laws and international labour standards.

Workers in Better Work factories have seen rising weekly pay, and are now less concerned with excessive overtime and abuses of probationary contracts.

Meanwhile, factories where workers report better working conditions are up to 8 per cent more profitable, while the average firm increased its revenue to cost ratio by 25 per cent after four years with Better Work.

Another programme – Sustaining Competitive and Responsible Enterprises (SCORE) – for nearly 120 small and medium-sized companies in the wood and furniture industry has also shown that social dialogue plays an important roles in improving not only working conditions but also in enhancing productivity and competitiveness.

About 90 per cent of SCORE enterprises in Viet Nam reported cost reductions and half of them indicated defect reductions as a result.

Better Work Viet Nam is funded by SECO, Irish Aid, and the Netherlands Ministry of Foreign Affairs, Employment and Social Development Canada (ESDC) and the United States Department of Labor (USDOL), while SCORE receives funding from SECO and the Norwegian Government.

“While there has been good progress achieved, the support to enhance social dialogue, productivity and working conditions remains relevant,” said the Swiss Ambassador, who affirmed Switzerland’s continued support to Viet Nam with official development assistance (ODA) and the recently-launched Swiss Country Strategy 2017-20 for Viet Nam.

“Among other objectives, Switzerland will support the creation of a competitive and resource-efficient private sector. This includes improvements of productivity and working conditions to ensure better access of Vietnamese products to foreign markets,” she added. 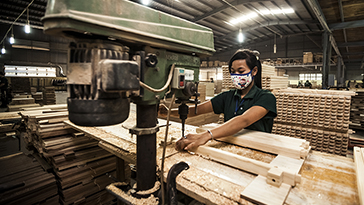