HANOI (ILO News) – Viet Nam’s non-compliance rate with the minimum wage in the garment, textile and footwear sector is the lowest among seven garment-exporting countries in Asia, at 6.6 per cent, a new ILO report has shown.

It means out of every 100 wage employees in this sector, 6.6 earn less than minimum wage, which aims to protect wage earners from unduly low pay.

This rate is far better than the second lowest country in the list – Cambodia at 25.6 per cent – and almost 9 times lower than the top – the Philippines at 53.3 per cent.

While minimum wage compliance is weak throughout all Asia’s garment industries, the depth of non-compliance varies among countries.

“The depth of non-compliance is an important dimension because a worker being paid 99 per cent of the minimum is in a very different situation to one receiving only half of the minimum,” said Matthew Cowgill, ILO chief technical adviser on labour standards in the global supply chain, who is the lead author of the report.

In all the countries, women are more likely than men to be paid below the minimum wage in the garment sector. Again, Viet Nam is among the nations with smallest gaps (at 5.7 percentage points), behind Cambodia and Indonesia, whereas the largest male-female non-compliance gap is found in Pakistan (60.4 percentage points).

The report also pointed out that garment workers with lower levels of education are more likely to be paid below the minimum wage.

“Minimum wages play a vital role in the garment and footwear sector, in which collective bargaining over wages is relatively rare,” Cowgill said.

According to the report, the design of minimum wage systems, including the minimum wage rate and the complexity of the wage structure, are important considerations for improving compliance.

The role of the workers and employers’ representatives in the wage-adjustment process can also affect compliance, as can labour market governance and the robustness of the labour inspection system.

“Although Viet Nam stands out in comparison to its neighbours, any level of non-compliance with the minimum wage is a concern and this issue should continue to be closely monitored,” Cowgill added.

“Of course, compliance with the minimum wage is not the only factor of interest. The level of minimum wages matters, too. Viet Nam’s minimum wage is relatively low as a percentage of typical wages in the garment sector, when compared to other countries in the region.”

Viet Nam has four regional minimum wages currently ranging from VND2.4 million to 3.5 million (US$108 – 157). Each year’s minimum wages are proposed by the National Wage Council which includes representatives the Government, employers’ and workers’ organizations.

While praising the compliance rate with the minimum wage in Viet Nam’s growing garment, textile and footwear sector, ILO Viet Nam Director Chang-Hee Lee warned that data interpretation should be done in a cautious manner.

Viet Nam’s regional minimum wages increased by about 12-15 per cent on a yearly basis between 2014 and 2016 and will continue to go up by 7.3 per cent next year. 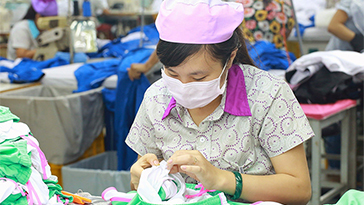