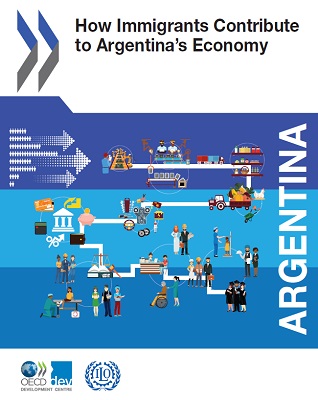 Download:
Argentina has a long history of immigration that continues to the present day. A joint report by the OECD Development Centre and the International Labour Organisation (ILO) on the economic impacts of immigration provides new insights into labour markets, economic growth and public budget, and makes policy recommendations to enhance immigrants’ contribution.

It shows that the labour market outcomes of native- and foreign-born workers are similar. The labour force participation and unemployment is almost equal, but immigrants are often informally employed and own-account workers, and earn less than the average native-born.

The analysis also suggests that immigration is usually not associated with job losses or income declines among the Argentinian-born population, and higher skilled groups might be positively affected.

The contribution of foreign-born workers is estimated at around 4% of GDP. Immigrants more frequently work in less productive sectors, and have lower average educational attainments and lower wages.

The following recommendations result from the report:

• There is scope for intervention targeting the gaps in wages and in school performance between foreign and native-born individuals
• Far from hurting native-born university graduates, increasing the number of high-skilled immigrants might even boost their labour incomes
• Policy interventions to reduce informal employment would be beneficial for the overall economy and would enhance the fiscal and labour contribution of immigrant and native-born workers alike
• Mainstreaming migration into a coherent policy agenda would help destination countries fully benefit from immigration