Tunis, 25 March 2014 - Jointly organized by Ministry of Equipment, Regional Planning and Sustainable Development and Ministry of Vocational Training and Employment in collaboration with the International Labour Organization, this workshop brought together representatives from government, policy and research institutions and development partners in Tunisia to discuss initial findings of a study exploring the current and future prospects for green job creation in the country. 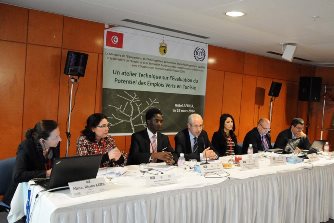 The study reveals that the Tunisian economy generated 102,000 green jobs as of 2010, with the largest shares being in water and waste, agriculture, and services. Results show that since 2005, there is a strong dominance of agriculture and administration, but with a growth in green jobs in electricity, water and waste.

The authors of the study, the Institute of Economic Structures Research (Gesellschaft für Wirtschaftliche Strukturforschung, GWS) in Germany and the Tunisian consulting firms Alcor and Ecoser, constructed a 46 sector input-output table allowing to read the intermediate demand for green products and to calculate direct and indirect jobs.

Participants discussed ways to consider the results of this assessment in the context of emerging programmes for employment promotion particularly in the various governorates. Tunisian officials expressed particular interest in connecting research with strategic policy choices that the country will be making for its energy supply diversification, restructuring of its waste management sector affected by the country’s current socio-political situation and longer-term development strategy.

Looking ahead, the study considers scenario simulations to model different future measures, investment and development paths with an e4.tn model (economy – environment – energy – employment) - in Tunisia. The Tunisian e4.tn model represents a simple numeric projection and simulation model for the Tunisian economy that follows a top-down approach. It is based on a time series of I-O tables that represent production interdependencies between sectors, encounter final demand by goods and services and the equivalent cost structure.

Participants helped to inform the various assumptions that will feed into the Tunisian e4.tn model in view of providing an indication of potential effects on the economy, production and employment, of a green path of growth and development.