Initiated in 2002, the ILO Brazil Project Combating Forced Labour identified awareness raising as a major activity aiming to disseminate that the problem exists and persists. A National Campaign was then launched on October 22nd 2003 in the House of Representatives. Coordinated and locally fund-raised by the ILO, the campaign was conceptualized, created, produced and disseminated entirely voluntarily by two publicity agencies and disseminated by several communications means all over the country, totalizing a sum of US$ 15,000,000.00 donated to the cause in the form of gratuitous exposure.

The campaign material has been displayed in the top 20 national airports, reaching almost 12 million passengers. State-level campaigns to fight forced labour, in Maranhão, Mato Grosso, Pará and Piaui, have since been developed. Media coverage of slave labour issues has increased exponentially (1,900% from 2001 to 2003). Moreover, web access hits to the Project’s internet page has increased more than 700% from 2003 to 2004.

In 2007, a publicity piece of art – a magazine centerfold – was created by the agency AlmapBBDO for ILO’s Project Combating Forced Labour in Brazil. The piece won one Advertising Award “Abril”, 2008 edition, in the category "Creation in Review – Reader’s Opinion".

Created in 1986, the Award has become over its history a reference for the publicity agents in Brazil. As a result, it is today one of the most seeked trophies among the sector.

The ad was broadcasted by several national level magazines in 2007. In a simple way, it seeks to sensitize readers on the exploitation of thousands of Brazilians submitted to a crime that harms mankind. Such workers have no labour rights; survive the worst forms of labour exploitation and degrading conditions. The worst, however, is that their most violated rights are their freedom and dignity.

When browsing the magazines that published the ad, the reader is faced with two handcuffed hands. These handcuffs also join the pages of the magazine not letting it to completely open. By forcing the magazine to open, the handcuff breaks and the reader sees, then, the title: "Unfortunately, eradicating forced labour is not as easy". The slogan of the ad is "Forced Labour. Lets Abolish this shame once and for all. " 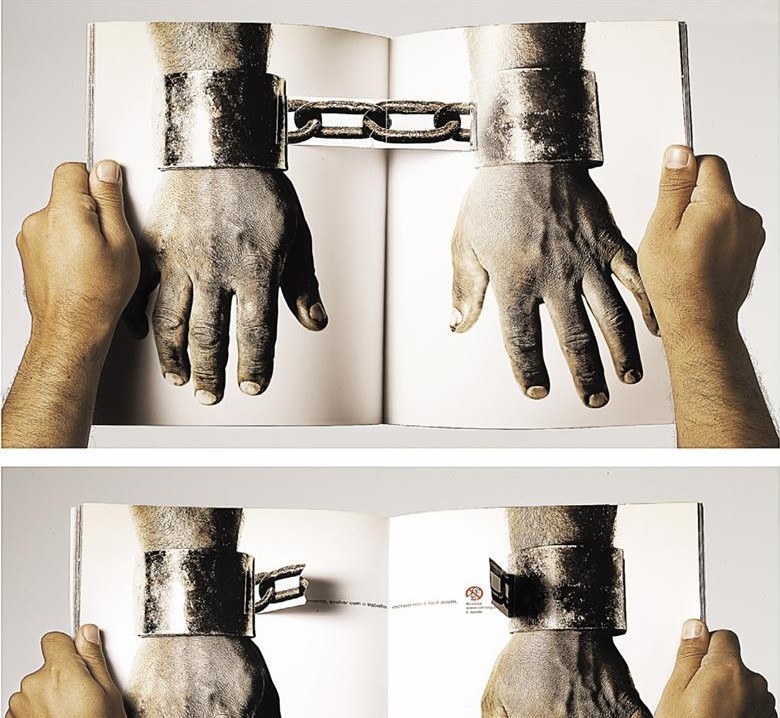