Like most countries, South Africa has also been heavily impacted by the COVID-19 Pandemic. On 23 March 2020, the President Cyril Ramaphosa, announced that the country would go into a national lockdown effective from midnight on 26 March 2020 and that all non-essential services and economic activities that required the movement of people would have to be halted for at least three weeks until 16 April 2020 in order to contain the spread of the virus. This has since been extended to end of April 2020.

Within this context, the EPWP, a national programme supported by the ILO, had to also suspended most of its projects activities. At the time of the lockdown the programme provided work and income to approximately 800,000 vulnerable South Africans. In line with the Governments emergency response provision, the EPWP:At the same time, the EPWP is also preparing for resuming operations when the current lockdown measures are relaxed. As the risk of contagion will still be present, the ILO is supporting the government with developing guidelines on appropriate mitigation measures that will allow project and activities to restart without putting workers and communities at undue risk. (Link to mitigation measures document when final).

The ILO through Employment Intensive Investment Programme (EIIP) is currently supporting the implementation of infrastructure components of Expanded Public Works Programme (EPWP) in South Africa. EPWP is a nationwide programme aimed at poverty alleviation through the systematic use of public expenditure to boost productive employment and the development of marketable skills among targeted sections of the community.

The first phase of the EPWP commenced on the 1st of April 2004, with the national goal of creating one million work opportunities (WO) over five years. EPWP Phase I was successfully completed achieving its target one year ahead of schedule. The second phase of the EPWP lasted from 2009/10 to 2013/14, and the goal was “to create 4.5 million WO or 2 million Full Time Equivalent (FTEs) jobs. At the end of the fifth year, the programme managed to create 3.5 million WO or 924,000 FTE’s jobs nationally.

EPWP Phase III, scheduled from 2014/15 – 2018/19, has drawn from the rich experiences of the first ten years of the EPWP implementation, with an employment target of 6 million WO or 2.5 million FTE. The programme will continue to operate in the four sectors, namely Infrastructure, Environmental and Culture, Social, and Non-state sectors.

One of the most important features of EPWP is the use of the Labour Intensive Construction (LIC) methods for infrastructure provision and delivery of services provided by all spheres of Government.

The International Labour Organization (ILO) has been engaged by the Government of South Africa to support both NDPW and LDPWRI in the coordination of the implementation of EPWP. Part the ILO’s responsibilities include training and capacity development of implementing agencies in the public and private sectors on the use of LIC. The ILO also provides technical support through the production of manuals, guidelines and intellectual tools for various stakeholders of EPWP including policy and decision makers, programme and project managers, consultants, trainers, mentors and contractors.

The ILO has been supporting the Government of South Africa since 1994. Some of the collaborative areas in the past include: 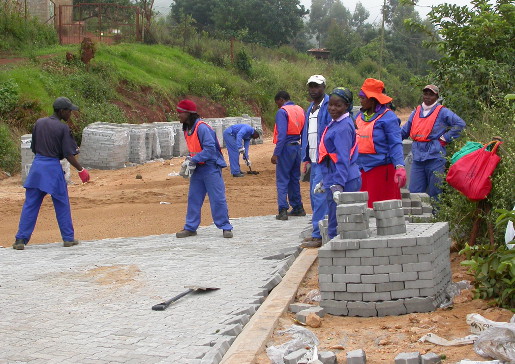