The Academy was opened by the Minister of Labour, Migration and Social Security of Spain Ms. Magdalena Valerio; followed by the Director of Social Economy of the Ministry of Labour Ms. María Antonia Pérez León; the Director of the ILO Enterprises Department and the Chair of the UN Task Force on SSE Mr. Vic van Vuuren; the President of the Spanish Social Economy Employers’ Confederation (CEPES) and President of the Social Economy Europe Mr. Juan Antonio Pedreño; and the High Commissioner of the SSE and Social Innovation of the Government of France Mr. Christophe Itier. Subsequently, the Director of the ILO Office in Madrid Mr. Joaquín Nieto and the Ambassador of Spain to the OECD made a keynote presentation on the trends and data on the future of work. The opening session was concluded by the Secretary of State for Employment Ms. Yolanda Valdeolivas.

After the opening, the participants engaged in an activity to reflect on challenges in the changing world of work and identify the role that could be played by SSE in addressing them. The week continued with a activities including field visits to SSE enterprises and organizations in Spain; plenaries on SSE public policies; and electives on key topics (i.e. social innovation, sustainable production and consumption, education systems, youth employment and gender equality, South-South and Triangular Cooperation, new technologies, impact measurement, and social cohesion).

On the last day, a high level dialogue on public policies to promote a human-centred agenda for the future work and the role of SSE was held with the Director General of Social Economy Ms. María Antonia Pérez León; the General Director of the Mexican Institute of Social Economy (INAES) Mr. Juan Manuel Martínez Louvier; the Advisor of the Ministry of Agriculture of Tunisia Ms. Nawel Jabbes; and the Head of the Social and Solidarity Department of the Ministry of Labour and SSE of Luxembourg Mr. Marco Estanqueiro. The dialogue was moderated by Mr. Roberto Di Meglio, Senior Specialist on SSE at ILO Coop Unit.

The Academy was concluded with a manifesto signed by the Ministry of Labour of Spain, the CEPES, and the ILO on the role of SSE in the future of work. The manifesto recognizes the role of SSE in creating jobs and economic opportunities particularly for youth, women, persons with disabilities, and other people at risk of social exclusion. It also states that SSE can bring diversity in economic systems as a business model that mitigate social and territorial inequalities through more equitable redistribution systems.

In the context of the future of work, the manifesto highlights the potential of SSE in bringing social innovations against challenges in the world of work caused by climate change, technological advancements, demographic shifts and globalization. Particularly, it refers to the relevance of SSE model in providing quality social services and consolidating the Welfare State, in the face of the rapid demographic change. 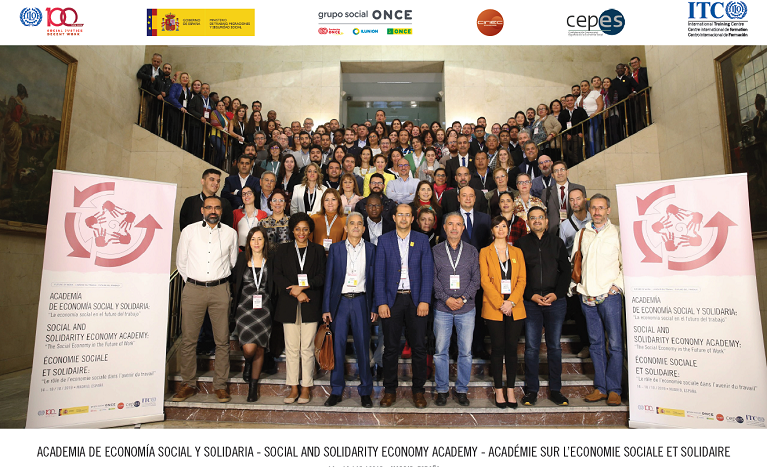