1. Could you tell us a bit about your background?

I discovered libertarian socialism as a student at York University in 1976, where I was studying English with the idea of becoming a journalist. The mid-late 70s were a high point of working class confidence in the UK. There was also a government favourable to cooperatives and a rediscovery of ‘common ownership’ of enterprises. The decade between 1975 and 1985 witnessed fast growth in the number of worker cooperatives. By 1985 there were more than 2,000 in the UK. After university I joined one of the many collective publishing and print production projects that had sprung up and organized along cooperative lines.


2. You currently work as Client Services Director at Calverts Cooperative. What is this cooperative about?

Calverts is a worker-owned creative design studio and print shop. It was founded by seven people in 1977. It was the product of a conflict between employees and manager-owners of a publishing and printing subsidiary of the Institute for Research in Art and Technology. It started as a ‘sweat equity’ common ownership worker cooperative, designing and printing community, union and political publications. I became a member of Calverts in 1985.

Over the years, Calverts grew meeting its members’ evolving needs and aspirations and investing all its surplus in skills and technology development. It is now a leading print house and design studio, working for universities, consumer brands, arts organizations and publishers. It is still, however, also a ‘movement’ resource, often working pro bono for grassroots community organizations with which our members are involved. It has also remained true to its founding principles of equality. Our members are all hourly paid, on the same hourly rate - from the Finance Director to the Cleaner. We have no line managers, working instead as interlinked team circles, with a General Meeting every month. We have a culture of ‘emergent strategy’, and most decisions are made by consensus, using a mixture of sociocratic and devolved process. We try to avoid conventional voting, except when it is required by statute. This efficient and empowering approach is quite common in UK worker cooperatives, which are in the forefront of cooperative democratic innovation.


3. What other activities are you involved in as a co-operator?

Worker cooperatives in the UK fell back after 1985, and by 1999 the sectoral organization – Industrial Common Ownership Movement (ICOM) – was no longer viable. In 2000, ICOM merged with the consumer cooperatives’ apex to form a new apex body called Cooperatives UK. At that time I had not really been concerned with the cooperative movement outside worker cooperatives. I participated in a national cooperative congress with the idea of selling Calverts services to other cooperative businesses. The people I met, the friendships I made, and the things I learned at the event made me want to deepen my understanding of cooperatives.

In 2004 I was elected to a policy forum called the Worker Cooperative Council, then served as a board member of Cooperatives UK from 2006 to 2011. By that time, I found out that I was, in effect, already a ‘barefoot’ worker cooperative organizer - because groups would approach Calverts to learn from our experience, with the idea of setting up their own cooperatives, and I would help them. I was also giving presentations on worker cooperation to groups of students, particularly in the creative industries, in the context of the increased social and economic pressure on young workers after the 2008 crisis.

I formalized this in 2012, when I set up Principle Six that provides support and advice on cooperative enterprise development in areas of membership strategy, campaigning, policy, branding, copywriting and editorial and strategic communications. Through Principle Six I became involved with a range of cross-movement bodies, including the board of a specialist cooperative lender (Cooperative and Community Finance); the London regional cooperative council (Cooperatives London); a consortium of independent coop business advisers (London Coop Development); and now a crowdsourcing platform for cooperative development (Platform 6).

At the moment, I am focussing more energy on grass roots, local and international worker cooperative organizing. I still work part time at Calverts, managing key client accounts and maintaining Calverts links with the wider movement. I also serve as a board member of CECOP, European confederation of industrial and service cooperatives and support its communications team.


4. What do you think are the challenges and opportunities for the cooperative movement? How have you been addressing these challenges within your work?

Growing the cooperative movement is not so much a matter of finding the right formula, but of understanding how changes in the composition of communities, and in the world of work, are producing forms of collective resistance in new places. We need to see where people are already cooperating, using solidarity principles to articulate their demands for a better life, to see how we can connect with them - bringing in the technology of cooperatives, and putting our experiences to work.

This has implications for where we put our limited energy and resources. For me, defending cooperatives is important, but lobbying governments for special treatment is not a core task. Similarly, we might think there are self-evident opportunities for cooperation in (for instance) social care, platform-based businesses, or self-employment – but we will not succeed by offering top-down solutions. We need an agile strategy based on a close analysis of currents for social change, associating with them and investing tactically to see ‘what works’. This is the opposite of formulating grand narratives and strategies, where we propose cooperatives as ‘the answer to everything’. In this spirit, my recent work has been focussed in five main areas.

1) Supporting disaffected young people who are articulating a desire to take control of their situation: I helped with the formation of AltGen, the campaign for youth cooperation, and I also mentor young worker cooperatives in London.

2) Organizing around housing and public space: I work with the London Radical Housing Network that brings together housing cooperatives, tenants of municipal housing and unions of private sector renters to promote access to decent housing.

3) Creating a better technology sector: Recent technological changes are transforming the world of work. I work with CoTech, a growing network of worker cooperatives providing technology, digital and creative services. The members of the network can use their collective experience, skills, and resources to promote the worker cooperative model that can create better workplaces, better products and better value for customers.

4) Connecting the cooperative movement with organized groups of super-exploited workers and new, small, and industrial unions, to see what scope there is to bring together these different strands of worker cooperation in a productive way.

5) Strengthening the existing network of worker cooperatives, creating accessible resources of knowledge, practical support and funds to spread and deepen cooperation. An example of this is the Worker Coop Solidarity Fund, which has collected more than £120,000 in four years in the form of micro-contributions from individual members and supporters. This means we can independently underwrite small worker cooperative education projects, fund co-learning and mentoring activity, and sometimes just give tiny amounts of money where it will make a difference. One example is that we have been able to sponsor CECOP’s 40th anniversary General Assembly and conference to be held in Manchester, which we hope in turn will result in meaningful conversations and learning between worker and social co-operators in the UK and across Europe. 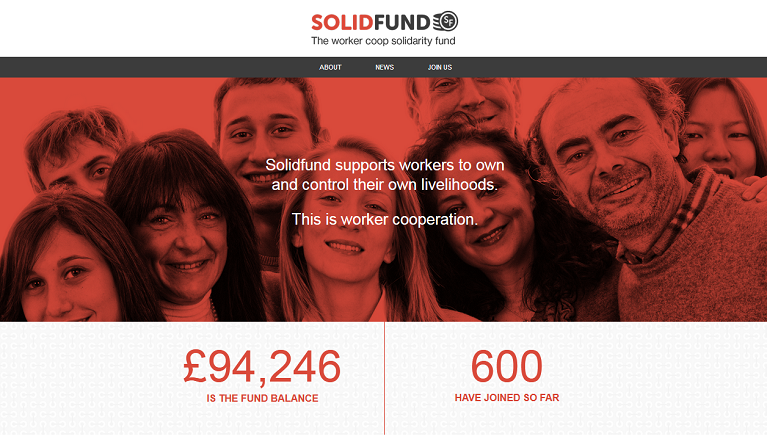