Sierra Leone made a very significant move towards recognizing, promoting and implementing decent work for women and men in the country by ratifying 8 ILO Conventions and one Protocol.

“I very much welcome the deposit of these nine key ILO instruments. They are a testimony of the will of the people of Sierra Leone for peace, stability and good governance. They demonstrate its resilience in ensuring that recovery from crisis is founded on human rights and decent work,” said Ryder.

He highlighted the fact that the choice of instruments ratified was closely aligned to that of other countries in the region, focusing on similar themes: migrant workers and forced labour (anti-trafficking), occupational safety and health, and domestic workers. This coordinated move, he said, augured well for a comprehensive implementation of these instruments and synergies in promoting decent work for all throughout the region.

“The workplace is a good place to start improving the life of the people, promoting peace and preventing conflict, enabling crisis recovery and building resilience”, Ryder added.

With the ratification of both Conventions on migrant workers, the Protocol to the Forced Labour Convention, the Domestic Workers Convention and the Convention on private employment agencies, Sierra Leone demonstrates its strong commitment not only to fight human trafficking but also to promote decent work for all workers, including those having left their country for employment purposes and categories of workers that are less protected by labour legislation (such as migrant workers).

The ratification of these 9 Conventions, including the two leading Conventions on occupational safety and health, the labour administration Convention, and the labour statistics Convention, can be seen as a commitment from the people of Sierra Leone and their representatives to continued improved governance and a step closer to meeting the Sustainable Development Goals (SDGs), notably SDG 1 (No poverty), 3 (Good health and well-being), 8 (Decent work and economic growth) and 10 (Reduced inequalities), and ensuring that no one is left behind.

The Sierra Leone Ambassador and Permanent Representative, His Excellency Mr Lansana Alison Gberie declared “As a government, we are committed to improving the labour standards of the workforce in Sierra Leone as well as creating a private sector business-friendly environment that makes the law clear, consistent with international standards and easy to comply with for domestic and foreign investors. By ratifying these nine (9) ILO Conventions and Protocols, we have taken steps to eliminate compulsory and forced labour, eliminate discrimination against migrant workers and domestic workers, , abolish child labour, promote occupational safety and health standards, and ensure a thriving and responsible private employment agency sector in Sierra Leone.”

In 2018, within the framework of the ILO Centenary ratification campaign, the Government, in consultation with employers’ and workers’ organizations, agreed to the ratification of the ten ILO Conventions and one Protocol and promoted the alignment of national labour legislation with international labour standards, taking into account the comments of the ILO supervisory bodies. The ILO provided technical comments on the draft Labour Act consolidating different pieces of legislation that had been discussed by the Joint Consultative Committee. It is expected that the ratification of these 9 instruments, and their entry into force in the near future, will allow a favourable environment for the adoption of a modern legislative framework conducive to decent work for all.

At the conclusion of the ceremony, the ILO Director-General thanked Ambassador Lansana Alison Gberie, the Government of Sierra Leone, led by His Excellency President Julius Maada Bio and Sierra Leone’s workers and employers organizations for their “commitment to the rights of working men and women, as set out in ILO instruments.”

The nine instruments will enter into force in Sierra Leone on 25 August 2022. 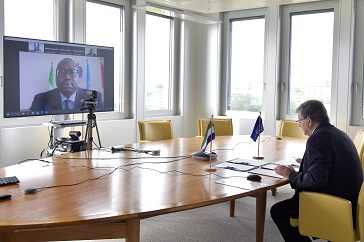 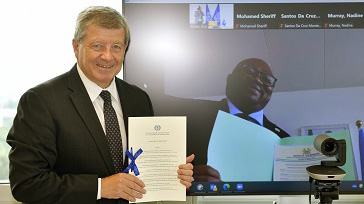