On 9 December 2020, Namibia became the third country, after Uruguay and Fiji, and the first African country, to ratify the ILO’s Violence and Harassment Convention, 2019 (No. 190), a year after it was adopted by the International Labour Conference. At the same time, Namibia deposited the instrument of ratification for the Domestic Workers Convention, 2011 (No. 189), becoming the thirty-first ILO Member State, and the fifth Member State in the African region, to ratify this important Convention.

H.E. Penda Naanda, Permanent Representative of Namibia to the United Nations Office at Geneva, deposited these instruments of ratification with ILO Director-General, Guy Ryder, in a virtual ceremony.

The Convention also requires ratifying member States to adopt, in consultation with representative employers’ and workers’ organizations, an inclusive, integrated and gender-responsive approach to preventing and eliminating violence and harassment, through prevention, protection and enforcement measures and remedies, as well as guidance, training and awareness-raising. It also recognizes the different and complementary roles and functions of governments, employers and workers and their respective organizations, taking into account the varying nature and extent of their responsibilities. The Convention and Recommendation are tangible evidence of the enduring value and strength of social dialogue and tripartism, which will be essential in implementing them at national level.

In depositing the official instrument of ratification, His Excellency Penda Naanda, stated: “The adoption of Convention No.190 has introduced an important overall framework within which Namibia can address deep-seeded social problems that have a unique impact on the World of Work. For many years, our country has been grappling with the problem of sexual and gender-based violence and harassment. The legacy of apartheid in the form of racist violence and harassment is unfortunately still alive, particularly in the world of work, and bullying and various forms of behaviors that inflict physical, emotional, and/or economic harm persist. At present, plans are underway to embark upon a programme of awareness-raising and the training of change agents, to commence in early 2021, while at the same time, draft legislation and regulations are being prepared to effectuate the right to a world of work free from violence and harassment and to establish a related occupational safety and health regime. Our plans are ambitious and will be based on short, medium and long-term strategies. We will be guided by the Convention and its accompanying recommendation to introduce in the world of work a new paradigm of respect for human dignity.”

ILO Director-General Guy Ryder, thanked the representative of the Government of Namibia for his country’s ratification. “The framework provided by Convention No. 190 is, more than ever, of utmost importance during the current COVID-19 pandemic, since many forms of work-related violence and harassment have been reported across countries since the outbreak began,” G. Ryder said. “Convention No. 190 has a crucial role in shaping a human-centered response and recovery that tackles injustice and supports the building of a better normal, free from violence and harassment. He noted that this ratification confirms the Government of Namibia political will and support towards the creation of a world of work free from violence and harassment, based on dignity and respect for all."

The ratification of Convention No. 189 by Namibia represents an important step that supports a series of measures taken to provide fundamental protections to domestic workers, some three-fourths of whom are women, including millions who are also migrant workers and particularly vulnerable to exploitation and abuse. As of June 2020, the ILO estimated that the COVID-19 pandemic has significantly affected some 72 per cent of domestic workers around the world and this Convention and its accompanying Recommendation provide tools for ensuring the effective promotion and protection of their human rights, including their rights at work.

In depositing the official instrument of ratification for the Domestic Workers Convention, 2011 (No. 189), His Excellency Penda Naanda stated that: “There are approximately 50,000 domestic workers in Namibia, constituting 7% of Namibian employees, of whom more than two-thirds are female. Despite their importance, domestic workers generally fall within the ranks of the lowest paid workers. Namibia’s first post-independence labour law, the Labor Act, 1992, covered all employees, including domestic workers and farm workers, and afforded fundamental labour rights and protections, including a range of mandatory minimum basic conditions of employment. Namibia is proud to have participated actively in the two-year debate at the International Labour Conference that resulted in the adoption of Convention 189 in 2011. Thereafter, at home, a tripartite decision was made to support the process of introducing a minimum wage and supplementary minimum conditions of employment for domestic workers through the appointment of a tripartite Wages Commission as part of Namibia’s path to ratifying the Domestic Workers Convention. The set goals were achieved, and the Wage Order for Domestic Workers came into effect in April 2016. A second Wage Order was promulgated in 2018. In addition, several trade unions for domestic workers came into existence. Today’s deposit of the instrument of ratification will reinvigorate Namibia’s efforts to achieve Decent Work for Domestic Workers."

Upon receiving the instrument of ratification of Convention No. 189 from Namibia, the ILO Director-General, Mr. Guy Ryder, recalled that: “The objective of Convention No. 189 is to improve living and working conditions for the millions of domestic workers throughout the world, guaranteeing them a decent job that provides them with protections equivalent to those enjoyed by other workers. Domestic workers are among the most precarious and the most poorly remunerated workers. Moreover, they frequently work in conditions of informality in which they are deprived of basic rights, such as limits on the length of the work day, the right to rest periods, a minimum wage that enables them to meet their basic needs, and access to social protection, including maternity protection. Namibia’s ratification of Convention No. 189 affirms the commitment it has already shown to extend basic labour rights to all workers and strengthen the measures already taken at national level. It is hoped that Namibia’s ratification of this Convention will encourage other countries in the region to join the growing number of ILO Member States that are taking effective measures to protect the rights of domestic workers, with the aim of ensuring that these workers can enjoy decent work in conditions of dignity”. 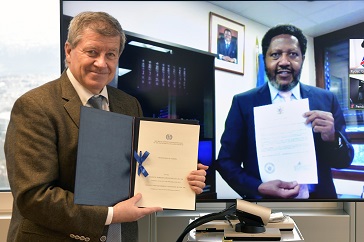