On 7 December 2020, the Government of Saudi Arabia deposited with the International Labour Office the instruments of ratification for the Protection of Wages Convention, 1949 (No. 95) and the Hygiene (Commerce and Offices) Convention, 1964 (No. 120). These instruments have thus received their 99th and 52nd ratifications, respectively, highlighting the crucial role these instruments play in establishing safeguards in protecting workers’ rights and wellbeing, even more so in the times of COVID-19. Both conventions thus have a crucial role in shaping a human-centered response to the crisis.

The ILO Protection of Wages Convention, 1949 (No. 95) sets out important protections for workers on one of the core aspects of their working conditions. In particular, the Convention aims at ensuring the regular payment of wages directly to the worker, without undue deductions, and the freedom of workers to dispose of their wages without limitations. They also lay down rules to protect the remuneration of workers in case of their employer’s insolvency. The ratification of Convention No. 95 is thus an important step, representing a commitment to protect workers’ means of subsistence, which is of particular relevance in the current times of crisis, as recently again confirmed by the findings of the ILO Global Wage Report 2020-21.

The Hygiene (Commerce and Offices) Convention, 1964 (No. 120) sets out occupational safety and health protections for workers in shops and offices, including basic standards for workplace layout and work-station arrangements, hygiene and sanitary facilities, and the availability of first aid. Its ratification represents an important commitment to the safety and health of workers.

With the ratification of these two Conventions, Saudi Arabia is now a ratifying country to 18 ILO Conventions including six of the eight Fundamental Conventions.

In depositing the instruments of ratification, H.E. Ambassador Abdulaziz M.O. Alwasil stated: “The ratification of these two conventions comes within the framework of Saudi Arabia’s efforts and commitment to develop and protect the labour environment to reach the highest international standards. The Kingdom of Saudi Arabia has recently launched a comprehensive national programme aimed at protecting and ensuring the payment of wages of workers in the private sector through action by the concerned national authorities. With more than 12 million foreign workers, in addition to about two million Saudi citizens working in the private sector, the Kingdom has taken serious measures and issued the laws necessary to protect wages and to guarantee a healthy work environment.”

ILO Director-General Guy Ryder thanked the Government of Saudi Arabia for its country’s ratifications. “With the ratification of these conventions, Saudi Arabia has once again renewed its commitment to the ILO's normative system and to achieving full respect for workers’ rights”, Ryder said. “The particular importance of these two conventions at the current time of crisis is self-evident, and the safeguards enshrined in their provisions, more than ever, are of utmost importance during the COVID-19 pandemic.” The Director-General welcomed the political will of the Government and the social partners to protect workers’ rights and welfare, noting that the ratification of these two instruments was in line with the measures already taken by Saudi Arabia to strengthen protections for workers in general and to respond to the particular labour market challenges of the COVID-19 pandemic. In conclusion, the Director-General re-confirmed the ILO’s readiness to accompany Saudi Arabia on this path. 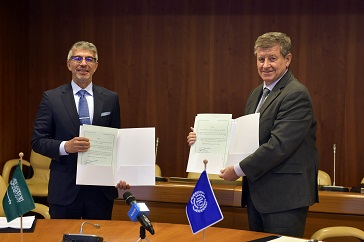