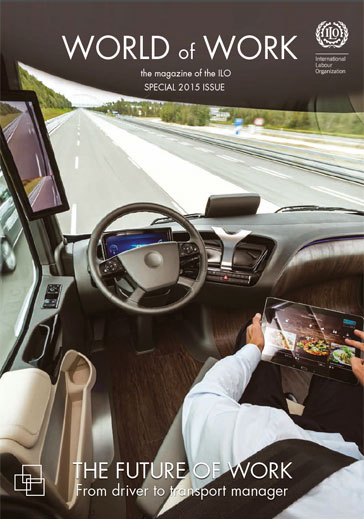 Download:
As technology advances at an ever faster pace, governments, businesses and workers struggle to keep up with the new trends.

But new technology like the “Future Truck”, which we feature in this magazine, is not the only challenge. The head of ILO research, Raymond Torres, shows in his article, “A changing world of work”, that new forms of employment and growing inequalities are just as challenging.

Then we take a look at the movement of workers from the informal to the formal economy, and how to make small and medium-sized enterprises more productive. The issue also discusses key issues determining the working conditions of the global workforce, including labour protection.

Following from the 2014 Conference, the head of the ILO’s Special Action Programme Against Forced Labour talks about how the Protocol to the Forced Labour Convention can help end this scourge once and for all. We also look at how the ILO’s artist engagement programme has helped raise awareness of issues like forced labour among new audiences.

The recent second anniversary of the Rana Plaza collapse reminds us about the need to ensure safe and acceptable working conditions in the garment and other industries around the globe. We have a photo report on how the ILO is helping to strengthen labour inspection in Bangladesh.

104th Session of the International Labour Conference
Skip to top