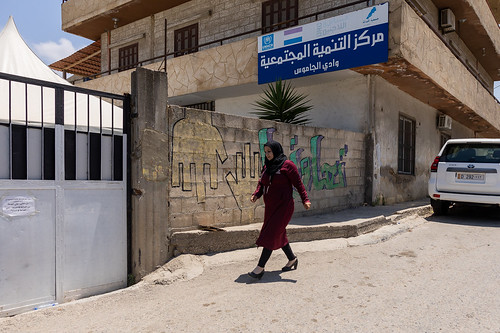 Forced displacement has surged in scale and complexity around the world, becoming increasingly protracted. To rise to the challenge crises response must shift to humanitarian-development approaches, backed by more dignified, inclusive and comprehensive programmes for refugees and the communities that host them.

Lebanon is no exception.

The country’s government estimates 1.5 million Syrian refugees residing within its territory, with 90% of them living in extreme poverty. Lebanon, which is hosting the highest number of refugees per capita worldwide, is also facing its worst socioeconomic crisis in decades. The country’s severe and prolonged economic depression is, according to the World Bank, "likely to rank in the top 10, possibly top 3, most severe crisis episodes globally since the mid-nineteenth century."

Forcibly displaced persons face specific vulnerabilities in the country, including psychological trauma, lack of employment opportunities and protection risks. Meanwhile, host communities struggle to pursue their own development efforts in an environment that has been transformed by a large influx of newcomers amid its already endemic challenges.

Robust and effective partnerships in Lebanon that maximize synergies and leverage comparative advantages have become crucial. Self- reliance, empowerment of all people and social cohesion need to be facilitated and strengthened.

With this in mind, the Government of the Netherlands-supported PROSPECTS partnership, comprising of the International Finance Corporation (IFC), the International Labour Organization (ILO), the UN Refugee Agency (UNHCR), the UN Children's Fund (UNICEF) and the World Bank, is jointly acting on multiple fronts across Lebanon.

The partnership aims to reduce vulnerabilities and increasing social stability for refugees and host communities by improving resilience and self-reliance through a joint humanitarian-development approach, focusing on nexuses between access to protection, education and work.

This photo gallery sheds light on a few of the joint activities that the partnership is carrying out in the country, bringing its concerted efforts to the next level of support for the benefit of the Lebanese society as a whole. It is doing so by fostering an enabling environment for socio-economic inclusion, improving access to education and protection for vulnerable people on the move, and eventually strengthening the resilience of the host community.

1. Syrian Fatima Mohammad Kheir Al Zaytoun walks in front of the Community Development Center (CDC) in Akkar, northern Lebanon. Community Centers are public spaces established with the main goal of providing both refugees and Lebanese with a safe space to learn, communicate, share experiences, granting them access to specific care when needed. Standards activities in the CDCs include awareness raising, skills-training, and learning activities.