KERATSINI, Greece (ILO News) – In a country like Greece – where two out of every ten workers are unemployed – it was not difficult for the Kinofelis Public Works Programme to find beneficiaries.

Fotis Kafatos* is one of them. He was unemployed for four years.

The 52-year-old father of one used to work as a plumber before he lost his job and joined Greece’s unemployment lines – the longest in the 28-nation European Union.

Many of the unemployed like Fotis have been actively seeking work, but the private sector was unable to provide enough jobs in this crisis-shaken country. In the aftermath of the crisis, unemployment in Greece swelled to a record 27.9 per cent in 2013, from 8.1 per cent in 2008. The situation has improved slightly since, but the rate is still very high, at more than 20 per cent.


The programme focusses on real projects, work readiness, including for the private sector."

In 2011, as part of the response to the crisis, the Greek government launched a direct job creation programme called Kinofelis, the Greek word for “common benefit”. Today, the programme, which is financed by the Social Fund of the European Union and the Greek Government to the value of 308 million euros, operates in all municipalities of Greece reaching more than 45,000 beneficiaries.

Kinofelis aims at activating the unemployed by providing them with a meaningful and relevant work experience. The programme also fights against social exclusion of the long-term unemployed, provides skills training and contributes to local development. It offers eight months of employment to participants, with the wage costs covered by the Greek Ministry of Labour.

A points system is used to identify the most vulnerable from among the many who apply, including older workers like Fotis who have the fewest alternatives to find a job. Sixty-one per cent of the beneficiaries are long-term unemployed.

This version of Kinofelis has a much stronger focus on employability: “The programme focusses on real projects, work readiness, including for the private sector. Before, most people ended up in municipal services to make up for the staff there that was shed during the crisis,” explains ILO project coordinator Maikel Lieuw-Kie-Song.


A programme of “common benefit”

The ILO was contracted through the Structural Reform Support Service of the European Commission to support the Ministry of Labour with improving Kinofelis during 2016-2017.

The current version of the programme now implements a wider range of projects that are aligned with the skills profiles of the unemployed to ensure that work experience is as relevant as possible. It offers eight instead of five months of work, pays the minimum wage and shoulders the relevant social security and unemployment benefit contributions.

A recent survey, conducted at the beginning and the end of the programme cycle, revealed a very positive impact, not only on participants but also on the daily life of communities.

“When we started to construct the pavements, people came to see us from their balconies and applaud us,” says one of the beneficiaries.

But not only public infrastructure benefitted from Kinofelis, as participants were placed in a wide range of workplaces, from social kitchens to museums to care facilities.

Beneficiaries were not only able to upgrade their living standards and to pay taxes and social security contributions but also changed their social behaviour: while more than 90 per cent of those surveyed said they used alcohol or drugs as a coping mechanism before they entered Kinofelis, less than six per cent said so towards the end of the programme.

“The programme boosted the health and self-worth of participants who got used again to work discipline and readjusted their priorities in life,” explains Nelli Kambouri, a researcher from Panteion University who directed the survey.

Kinofelis may also help stem the brain drain from Greece: While 75 per cent of programme beneficiaries thought about migrating abroad before they entered Kinofelis, only 25 per cent still considered migration as an option when they left the programme.

The percentage of beneficiaries who considered undeclared work as a very likely prospect also dropped from 51 to 25 per cent.

“This clearly shows that beneficiaries have become less willing to compromise with jobs lacking the protection guaranteed by basic labour standards and social insurance systems. More than 80 per cent of those surveyed said that the programme had an impact on their daily lives. 94 per cent would recommend the programme to friends and relatives,” concludes Nelli Kambouri.

Even those who will not immediately find a job after exiting Kinofelis can now take a more confident look at the future. More than 90 per cent of participants expected to receive an unemployment benefit when they exited the programme, while just over 50 per cent did so when they joined Kinofelis.

“The survey results show that Kinofelis has been beneficial to workers and communities. The challenge of the programme now is continuity. It is important to make these positive impacts last, for example through participants accessing other active labour market policies. We also need to convince private employers to view the programme more positively and hire programme participants,” concludes Lieuw-Kie-Song.

* Name has been changed as the survey guaranteed anonymity to respondents. 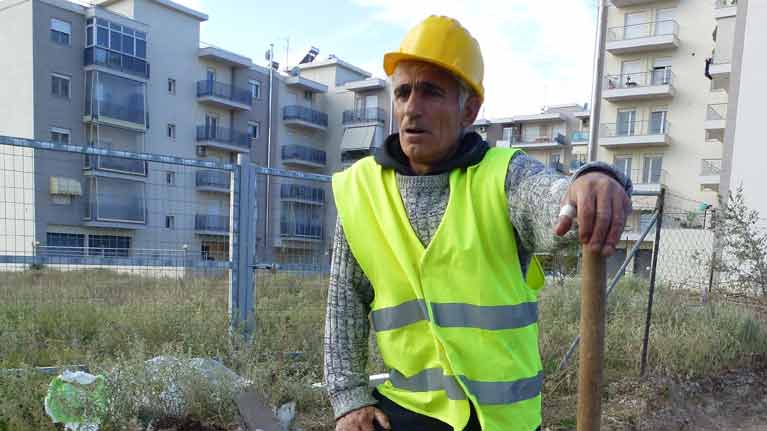