This story was written by the ILO Newsroom For official ILO statements and speeches, please visit our “Statements and Speeches” section.
DAJAMIA, Jordan (ILO News) - Keeping crops adequately irrigated can be tough in Jordan, one of the world’s most water-poor countries. It is certainly a challenge for Younes Shdeifat, a farmer in the underprivileged and agriculture-dependent governorate of Mafraq in the north of the country.


But thanks to an ILO labour-intensive development initiative that helped him build a simple but effective rain harvesting system, he should soon be able to start growing almonds on a modest-sized plot of land that lay fallow for years due to the scarcity of water in the area, which is classified as an arid to semiarid region.

Shdeifat said he could not have started farming the land without the backing of the ILO project, an employment-intensive investment programme (EIIP) that aims to improve local infrastructure, especially for the poorest and most vulnerable farmers.

“I’ve been trying to find someone to help me improve my farm’s infrastructure for a very long time,” Shdeifat said. “I cannot plant trees without a water source. Instead of wasting the rainwater each year, I want to make use of it for the farm. The best way to do this is through the use of traditional water harvesting techniques like water catchments.”

Through the EIIP initiative, which is being implemented with the Ministry of Agriculture and a number of local partners, Shdeifat now also has terracing around his farm to reduce soil erosion.

Shdeifat is not the only one benefiting from this project. The local community hosts a large number of refugees fleeing the crisis in neighbouring Syria, placing further pressure on the local labour market and public services. Local workers were employed to build the water catchment and the terracing, creating jobs and thus assisting in easing the strain of the refugee crisis on the local host community.

“The farmers chosen for the programme have small plots of land, which are in need of water catchments to help them store rainwater for the hot season,” said Awni Shdeifat, the head of Mafraq’s agricultural directorate. “This will help farmers maximise their crops for sale and in return increase their income. But it is also helping generate immediate jobs for local members of the community.”

These efforts are part of the ILO’s wider response to the Syria refugee crisis in the north of Jordan. The ILO chose to work with farmers on water catchments based on the findings of a local economic development strategy for Mafraq, developed by the ILO and a local economic development committee in Mafraq, which is composed of government officials and employers’ and workers’ representatives, as well as academics and members of civil societies. The strategy identified agriculture as an effective form of income generation that needed further investment.

“We found that while this area relies heavily on farming, it suffers from increased unemployment and poverty due in part to under-investment. This is why we are investing in this vital sector,” said Maha Kattaa, who coordinates the ILO’s response to the Syrian refugee crisis in Jordan.

The ILO and its partners are also focusing their efforts on maximising agricultural production through the use of greenhouses, and by providing technical training on ways to manage greenhouses including the use of drip irrigation.

“The influx of refugees has meant that there is higher consumption of water, so we have to find ways to use water more efficiently,” said Saif Alqrem, an engineer from the Agriculture Extension Division of the East of Mafraq, who is working closely with the ILO on providing farmers with job opportunities and training at the greenhouses. “We chose to focus on greenhouses because they consume less water than open field production. We chose drip irrigation over other forms of irrigation because it is also a way of saving water and energy.”

The resulting produce will also be processed and marketed locally, to help generate income for families working in the greenhouses.

The ILO hopes to expand these pilot projects to reach more areas, which have been hard hit by the influx of refugees.

“These initiatives have a number of outcomes. Creating employment opportunities is an important one, but just as important is creating social cohesion in areas which have borne the brunt of the Syrian refugee crisis,” said Kattaa. “Local partners are recognizing these results, and are supportive to upscale these on-going efforts.”

The ILO is also looking to key economic sectors to find practical means for integrating Syria refugees in the labour market, in such a way that would fill labour shortfalls, benefit the local communities hosting the refugees and contribute to overall national productivity and the economy. 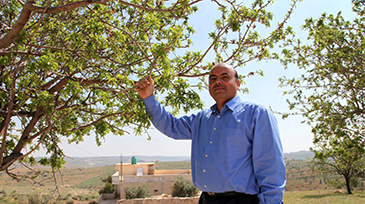