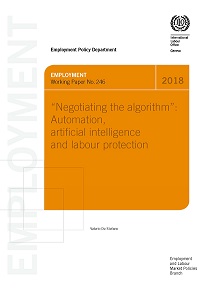 Download:
This paper aims at filling some gaps in the mainstream debate on automation, the introduction of new technologies at the workplace and the future of work. This debate has concentrated, so far, on how many jobs will be lost as a consequence of technological innovation. This paper examines instead issues related to the quality of jobs in future labour markets. It addresses the detrimental effects on workers of awarding legal capacity and rights and obligation to robots. It examines the implications of practices such as People Analytics and the use of big data and artificial intelligence to manage the workforce. It stresses on an oft-neglected feature of the contract of employment, namely the fact that it vests the employer with authority and managerial prerogatives over workers. It points out that a vital function of labour law is to limit these authority and prerogatives to protect the human dignity of workers. In light of this, it argues that even if a Universal Basic Income were introduced, the existence of managerial prerogatives would still warrant the existence of labour regulation since this regulation is about much more than protecting workers’ income. It then highlights the benefits of human-rights based approaches to labour regulation to protect workers’ privacy against invasive electronic monitoring. It concludes by highlighting the crucial role of collective regulation and social partners in governing automation and the impact of technology at the workplace. It stresses that collective dismissal regulation and the involvement of workers’ representatives in managing and preventing job losses is crucial and that collective actors should actively participate in the governance of technology-enhanced management systems, to ensure a vital “human-in-command” approach.