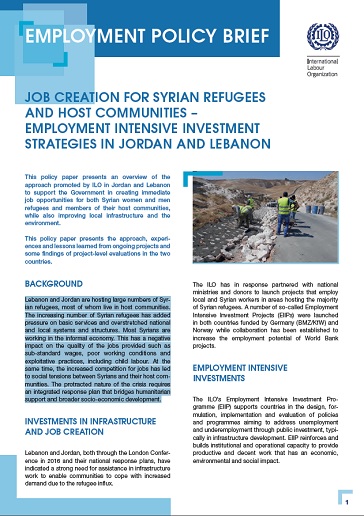 Download:
Lebanon and Jordan are hosting large numbers of Syrian refugees, most of whom live in host communities. The increasing number of Syrian refugees has added pressure on basic services and overstretched national and local systems and structures. Most Syrians are working in the informal economy. This has a negative impact on the quality of the jobs provided such as sub-standard wages, poor working conditions and exploitative practices, including child labour. At the same time, the increased competition for jobs has led to social tensions between Syrians and their host communities. The protracted nature of the crisis requires an integrated response plan that bridges humanitarian support and broader socio-economic development.

This policy paper presents an overview of the approach promoted by ILO in Jordan and Lebanon to support the Government in creating immediate job opportunities for both Syrian women and men refugees and members of their host communities, while also improving local infrastructure and the environment.