In Albania, several awareness raising activities and manifestations were organized in Tirana, Elbasan, Durrës, Fier, Vlorë, Shkodër starting from 19 May, and culminating in a concert on 12 June in Tirana.

The campaign focused on providing quality child protection services and ensuring quality education as key elements in combating child labour.
Around 54,000 children aged 5-17 years work in Albania according to an ILO and INSTAT survey. 65.8 per cent of these children work in poor working conditions or in dangerous jobs in the streets, or elsewhere.

In 2014, 2,500 children lived or worked on the streets according to the National Survey on Street Children in Albania. 30 per cent of them were forced to work by their families also living in difficult economic situations.

Awareness raising activities on the World Day were organized by the State Agency for Protection of Children’s Rights in cooperation with the Ministry of Education and Sports, the Ministry of Social Welfare and Youth and with the support of the OSCE, the International Labour Organisation (ILO), World Vision and Terre des Hommes.

In Moldova, 99 children participated in events informing them about the importance of education and the negative consequences of child labour. Children watched a movie and discussed child labour and how education can improve their future prospects. They were also involved in creative activities and games and painted together a banner with the slogan “No to child labour, Yes to quality education”.

A survey on children’s activities shows that one out of three children aged 5-17 years is engaged in some kind of economic activities. 18.3 per cent of children are involved in child labour in Moldova according to the same survey undertaken in 2009 by the National Bureau of Statistics in Moldova with ILO support.

Moldovan events were organized by the International Labour Organization in partnership with Terre des Hommes Moldova.

In Montenegro, a round table discussion was organized on 18 June about ILO solutions to prevent and combat child labour and the relevant legal framework of the country.

The Serbian commemoration of the World Day took place in Sombor organized by local trade unions. Winners of an essay and drawing contest on child labour were also awarded on this occasion.

Teachers give Red Card to Child Labour in Serbia 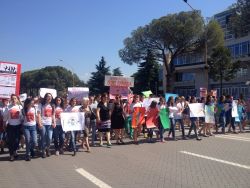