Holding up a “Red Card” at the yearly conference of the International Labour Organization (ILO), the EU Commissioner for Employment, László Andor, the Labour Minister of Belgium, Monica De Coninck, the Labour Minister of Luxembourg, Nicolas Schmit, and the Minister of Employment of the Netherlands, Lodewijk Asscher, supported the ILO’s "Red Card to Child Labour" Campaign. The campaign is backed by musicians Mike Einziger, Pharrell Williams, Hans Zimmer and others.

EU Commissioner Andor said that “all children should have the right to enjoy their childhoods, to play, to go to school, to discover the world. Today, an estimated 168 million child labourers worldwide do not have that right. This is unacceptable. I fully support the ILO's red card to child labour campaign and I am confident that many will follow the EU’s determined actions for doing away with child labour”.

Minister De Coninck underlined that “children should be learning, not working. Educating children is a long-term investment, while child labour is just a short-term solution.”

“There is no secret as to what needs to be done,” underlined ILO Director-General Guy Ryder talking about how to accelerate the decline in child labour. “Social protection, along with universal compulsory, formal, quality education at least up to the minimum age for work, decent work for adults and youth of working age, effective law and strong social dialogue together provide the right response to child labour.”

On 12 June, on the International World Day Against Child Labour, the Red Card to Child Labour Campaign will be launched worldwide with the song 'Til Everyone Can See, by Incubus guitarist Mike Einziger and violinist Ann Marie Simpson, with featured artists Pharrell Williams, Hans Zimmer and many more.

The campaign’s launch, which coincides with the start of the FIFA World Cup, will also feature an aerial art event in Rio de Janeiro with over 1,000 people coming together to form a giant human pinwheel – the emblem of the campaign. In New York, the giant screens on Times Square will display the campaign’s messages throughout the day.

World Day Against Child Labour comes a few days after the ILO released its World Social Protection Report 2014/15, which shows that many children do not receive the child and family benefits they need to realize their potential. 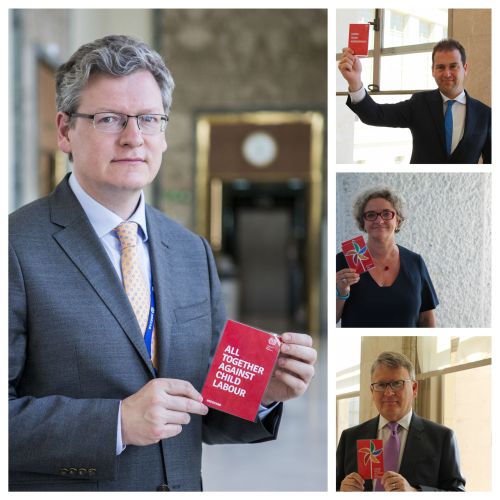