“The Future of work” is a phrase that now seems to be on everyone’s lips: studies, websites, seminars and even a discipline within an entirely new field of study – “futurology” – are all devoted to pondering what the world of work may hold for us in the coming decades. Many of these discussions revolve around how technological advances are transforming or destroying jobs, creating “sharing” or “gig” economies, overturning employment relationships, especially in advanced economies.

The Arab countries of the Gulf and Middle East are certainly not immune to such transformations. But we face unique circumstances that turn our thoughts on the future towards considerations altogether more vital and pressing. Given the regional instability, protracted conflicts in some Arab countries, endemic lack of social dialogue, high unemployment, widening inequalities and inadequate economic reforms, the future of work seems to be knocking more loudly on our doors than in other regions.

And for many of us, the echoes are ominous, because our future seems to be moving away from, not towards, social justice.

Think of the unprecedented numbers – in the tens of millions – of those who have left their homes with their families for reasons which have no connection with work, but which will have major labour market consequences.

Consider the displaced in “fragile states” – countries wracked by violence or conflict, where the labour market can no longer provide its people with employment and decent work. Other countries are dealing with the consequences of these conflicts through an influx of vast numbers of refugees, who will also need to work to survive, but who have put immense pressure on already stretched labour markets.

The region has, moreover, seen an alarming rise in extremism, hate and terrorism in recent years. The failure to reduce poverty and inequality, and the lack of inclusive economic growth and decent jobs, have significantly contributed to this rise.

How can we build a future of work where robust labour markets and smart employment policies will not only foster growth, but also support peace and stable communities, prevent violence and fragility, and build resilience?

Think also of our youth: young women and men aged between 15 and 24, who form over 18 per cent of the population of the Middle East and Gulf states (excluding Egypt and the Maghreb countries), and whose number is expected to grow by 43 per cent to reach 41 million in 2050. This will be the largest number of young people to transition to adulthood in the history of the region. These new entrants will further impact the region’s labour markets, which already suffer from the highest aggregate rate of youth unemployment in the world.

This, in a region with 10.2 per cent overall unemployment, and where the working age population is expected to increase by 76 million – or 77 per cent – to reach 175 million over the next 35 years.

How can we restructure and diversify our economies to ensure large-scale generation of future decent jobs, especially for youth? How do we upgrade workers’ skills so that they are qualified for the jobs of the future? What policies will promote a vibrant business environment capable of attracting significant investment and of creating more employment opportunities in the private sector, and what measures will make labour nationalization policies more effective?

Alongside our youth, let us also consider the ageing population, those of us aged 65 and above, whose number in the Arab States will increase more than five-fold from 5 million today to 27 million in 2050. This poses future challenges to the financial sustainability of today’s already inadequate social security schemes, struggling under the strain of sluggish economic growth, high unemployment, poverty and informality. These schemes will most likely face further challenges such the rise of new forms of work and the globalization of supply chains.

How can we restructure the region’s social security systems so that they cover all workers and their family members? How can countries advance the development of social protection floors as a human right?

Let us consider what the future of work holds for our women in a region characterized by lack of equal gender rights, and home to some of the highest female unemployment rates in the world. Women’s labour force participation rate of just 21 per cent - compared to 77 per cent for men – means significant lost economic potential, and boosting it must be a regional priority.

What measures can we take to enable women who are currently in or about to enter the labour force acquire the decent jobs of the future? What policies must we enact to enhance entrepreneurial opportunities for women? How do we remove the barriers preventing women from contributing their full potential to the region’s economy and society?

The shared challenges we face require a fundamental change of course from our current policy paradigm. In terms of employment alone, current policies will translate to 2.3 per cent annual growth in employment in the next 5 years. This growth is not sufficient to cover the 6 million jobs we need to create in the Arab States by 2020, notwithstanding the additional 13 million jobs needed in the decade to come.

As matters stand now, millions of people feel left out: children without secure futures, young people without a stake in society, parents without decent jobs. We need a new social contract in which all actors in the world of work engage in true social dialogue, to meet the aspirations of all our populations and create an inclusive and just future of work in which no one is left behind.

The questions raised here have no easy answers, and anticipating the future is difficult at the best of times – dauntingly so in light of the many uncertainties the region faces. But anticipating the future is important, because, simply put, it enables us to prepare for and shape the future we want: a future of more and better jobs that pay fair wages, of security in the workplace and social protection for families, better prospects for personal development and social integration, freedom for people to express their concerns, organize and participate in the decisions that affect their lives, and equality of opportunity and treatment for all women and men.

No one person or group can produce all the solutions. This is why the International Labour Organization (ILO) has invited all Arab countries to conduct national dialogues on the future of work, in order to prepare their economies for the expected changes, and to develop effective policy responses that can shape the future we want for our region.

The ILO will also host a regional Arab conference on 3 April in Beirut, bringing together worker, government and employer representatives, to forge a common understanding of the transformations affecting our world of work in the region, and to collectively determine policy options that can deliver the decent work opportunities and social justice on which the stability and success of our societies depend. 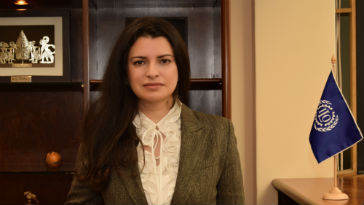