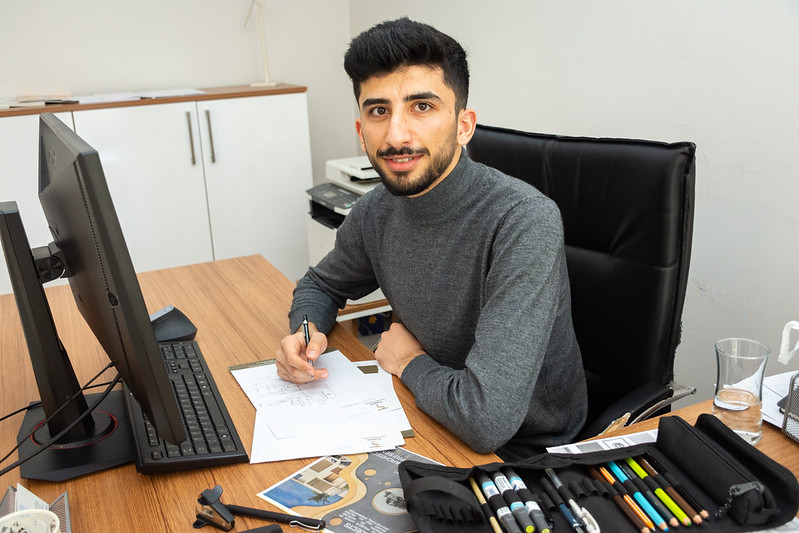 Maamun was happy when Jordan announced a three-day paternity leave for private sector workers, one month before the birth of his first child. But the 40-year-old computer engineer felt that period of time was not enough for him to spend time with his wife and baby boy.
That was in May 2019, when amendments to the Jordanian Labour Law endorsed the three-day paid leave.
“I was following the news about the labour law amendments, waiting for the endorsement of the leave,” says Maamun, who lives in the Jordanian capital, Amman, and works in a company in Al Qatrana town, in the southern governorate of Karak.
Maamun took the three-day paternity leave as well as four days of annual leave.
“The three days were useful for me to stay with my wife at the hospital, and to deal with some procedures, including birth registration,” he adds.


FACTS: Article 66 of the Jordanian Labour Law (2019)
a. Each employee is entitled to a full paid leave of 14 days per year in any of the following cases:
1. If he/she joined a course for labour education approved by the Ministry upon the candidacy of the employer or the manager of the establishment in cooperation with the concerned association.
2. For performing the duty of pilgrimage. To grant this leave, it is stipulated that the employee has worked for five successive years at least for the employer. This leave shall not be given more than once during the period of service.
b. The employee is entitled to an unpaid leave of four months if he/she joined an approved university, institute or college to study.
c. The employee is entitled to a paid paternity leave of three days.

When Maamun’s leave ended, his wife and their child moved to stay at her parents’ home for recovery.
In 2014, public sector employees became entitled to a two-day paternity leave in line with Jordan’s Civil Service Regulation. This leave increased to three days following an amendment to the regulation in 2020.


Mamoun believes that the paternity leave should be “at least” 10 days to help provide care for the newborn and mother.
Abu Ahmad, a government employee, agrees. “When my youngest boy was born a year ago, I did not know that I was entitled to a three-day paternity leave under the Civil Service Regulation,” says Abu Ahmad, 46, whose wife is a teacher at a private school.
“I still think that two or 3 days are not enough for a father to take care of his wife and the child. This means that the wife needs help usually from her sisters or mother,” he adds, calling for 7-10 days of paternity leave.


FACTS: The Assessment of the Maternity Insurance in Jordan, a piece of qualitative research conducted by the International Labour Organization (ILO), reports that the majority of mothers interviewed are in favour of increasing paternity leave to one or 2 weeks.

Shared responsibility
For Linda Kalash, executive director of Tamkeen for Legal Aid and Human Rights, a non-governmental organisation (NGO) focusing on labour issues, “the objective of paternity leave is to ensure that parents join efforts in providing care for the newborn child.”
“Both parents should have equal, separate parental leave,” says Kalash, who called for increasing paternity leave. “This equality supports positive parent-child relationships as well as work … in the absence of one parent, the other takes care of the child.”


FACTS: No ILO standard exists concerning paternity leave. However, the resolution concerning gender equality at the heart of decent work adopted by the International Labour Conference in 2009 recognises that work-family reconciliation measures concern both men and women. The resolution calls for governments to develop adequate policies for a better balance of work and family responsibilities, to include paternity and/or parental leave, with incentives for men to use them. The United Nations Children’s Fund, UNICEF, said in a report that family-friendly policies and programmes that support parents and caregivers are essential, and can include 4 weeks of paid paternity leave. The ILO Workers with Family Responsibilities Convention, 1981 (No. 156) recognises fathers’ involvement in family responsibilities in general and, with particular regard to parental leave. This recognition was an important step towards the creation of effective equality of opportunity and treatment for men and women workers.


Former member of parliament, Khalid Ramadan, who was on the Parliamentary Committee on Labour that endorsed the 2019 Labour Law amendments, says “paternity leave is established in the labour legislation, and this may pave the way for increasing paternity leave.”
According to an ILO policy brief, research suggests links between fathers’ leave, men’s take-up of family responsibilities and child development. Fathers who take leave, especially those taking 2 weeks or more immediately after childbirth, are more likely to be involved with their young children. This can have positive effects for gender equality in the home and at work and may indicate shifts in relationships and perceptions of parenting roles and prevailing stereotypes.

Mamoun criticised stereotypes “that men should to go out for work while women stay home”.
“I think that these misconceptions had a role in delaying the endorsement of paternity leave, and in depriving fathers of enough time to care for their newborn children.”