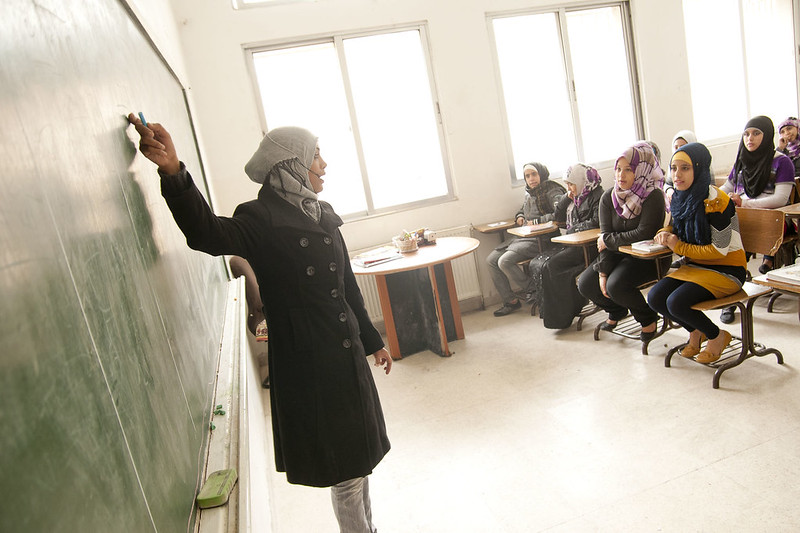 Noha is an Arabic language teacher who has worked at a private school for more than 20 years. Her male colleague has the same duties but only 4 years of work experience, yet his monthly salary is already equal to that of Noha.

Noha lives in Amman, and helps provide for her 4 children and husband, who is employed in a job with precarious working conditions.

“I find these school practices discriminatory,” says the teacher, adding that men are often paid more because they are seen as the main breadwinners, and women’s income is secondary.

“The idea that the providing for the family is the man’s primary responsibility is wrong.”

The World Bank estimated in 2020 the wage gap for women and men working similar jobs with similar education and experience in Jordan’s private sector at about 17%.

FACTS: Equal pay
Gender inequalities in pay are often assessed through an indicator known as the gender pay gap. The gender pay gap measures the difference between male and female average earnings as a percentage of the male earnings. For instance, if women’s monthly average earnings are 70% of men’s monthly earnings, then the gender pay gap is 30 percentage points. The gender pay gap can refer to differences in men’s and women’s hourly, weekly, monthly or yearly earnings. Usually, the hourly gender pay gap is smaller than the weekly, monthly and yearly gender pay gaps. This is because women tend to engage in paid work for fewer hours than men, as women continue to have greater family and domestic responsibilities. Women are therefore less likely to receive overtime pay, for example. Legal restrictions on women working overtime or at night may also be a factor. Different factors explain the gender pay gap, such as differences in education, experience, and occupational segregation. The relative importance of these factors varies by country and over time.


“A different type of discrimination”

Israa is a nurse and has worked at a private hospital in Amman for 18 years. She and her colleagues have the same duties, but male nurses, with less experience, are paid higher salaries.

“I have a nursing diploma, and they hold university degrees, which qualify them for higher pay scales. I have no problem with that,” Israa, 39, says.

“But I face a different type of discrimination. The hospital tasks male nurses with carrying out additional assignments, making these nurses eligible for extra pay. Female nurses are not offered these additional tasks,” she adds.

“Male nurses always get home health nursing assignments, regardless of the patient's sex/gender, and are paid JD 50 per visit,” she says.

Following her divorce, Israa has become the main provider for her 3 sons.

“I am repaying an instalment bank loan. Out of my JD 650 monthly salary, I am left with JD 70 every month,” she says.


FACTS: Article 53 of the Jordanian Labour Law
An employer who pays a worker less than the minimum wage, or discriminates in pay for work of equal value on the basis of sex/gender shall be fined not less than JD 500 but not more than JD 1,000, and shall pay the worker the wage difference. Penalty amounts shall increase with repeat contraventions.

“However, enforcing the law is a challenge … inspection should be enhanced, and workers’ complaints should be addressed by a specialised body, in addition to courts,” she added.

Inspection teams of the Ministry of Labour (MoL) “monitor payment of wages of male and female workers, ensuring that employers have no discriminatory practices,” said MoL spokesperson, Mohammad Al Saleh.

A stubborn and universal problem

In 2011, Jordan created the National Committee for Pay Equity (NCPE) with support from the ILO. Jointly led by the MoL and the Jordanian National Commission for Women (JNCW), the NCPE is mandated to promote policies and practices aimed at tackling the gender pay gap in the country. The committee groups 22 members representing the government, workers, the civil society, employers, the legislature, and the media.

A member of the Equal Pay International Coalition (EPIC), Jordan has endorsed mechanisms for digital payment of wages to protects the rights of private school teachers. The ILO and its social partners are lobbying Jordan to expand wage protection through electronic payment systems to cover all workers.

In the 2021 Global Gender Gap Report of the World Economic Forum (WEF), Jordan was among countries that have managed to close their economic participation and opportunity gap by at least 1 full percentage point in one year. DOS figures for Q4 2020, however, show a 24.7% unemployment rate in Q4 2020 (males 22.6%, females 32.8%), recording a 5.7 percentage point increase, compared to Q4 2019. And female labour force participation rate remains low (14%), compared to males (54%).

Unequal pay is a stubborn and universal problem. Across all regions, women are paid less than men, with the gender pay gap estimated at 23% globally. Gender equality and the empowerment of women continues to be held back owing to the persistence of historical and structural unequal power relations between women and men, poverty and inequalities and disadvantages in access to resources and opportunities.

Progress on narrowing that gap has been slow. While equal pay for men and women has been widely endorsed, with calls for prioritising in COVID-19 recovery, applying it in practice has been difficult.