BEIRUT (ILO News) – Under the high patronage of the President of the Lebanese Republic General Michel Aoun, the International Labour Organization (ILO) Regional Office for Arab States hosted an event in celebration of the organization’s 100-year anniversary in Beirut on 2 April, 2019.

Established in 1919, the ILO is the first United Nations’ agency to celebrate its centennial. Its Regional Office for Arab States has been headquartered in Beirut since 1976. As the only tripartite UN organization, the ILO aims to ensure that it serves the needs of working women and men by bringing together governments, employers and workers to set labour standards, develop policies and devise programmes to promote social justice and decent work across the globe.

The event, held at the Phoenicia Hotel, included the screening of a short film highlighting the achievements of the ILO and its partners in promoting decent work for Lebanon.

The celebrations concluded with a musical performance by renowned Lebanese artist Abeer Nehme, who performed a repertoire of songs celebrating the ILO ethos of promoting social justice and decent work, as well as a selection of traditional Lebanese songs.

Ruba Jaradat:
In her welcoming speech, ILO Regional Director for Arab States Ruba Jaradat extended the sincere gratitude of the ILO to the President of the Lebanese Republic General Michel Aoun for his High Patronage to the centenary event. She stressed that the event was as much about Lebanon and the joint efforts and achievements of its workers, employers and the government, in partnership with the ILO, to advance social justice and promote decent work.

Jaradat noted that within a few years of the Regional Office’s establishment, ILO activities in the region had expanded across the Levant and Gulf countries to include dozens of successful projects and programmes. In 1982, however, the Regional Office premises did not survive the fallout of the Lebanese Civil War. All archives, records and equipment were burned. Thus, an inestimable amount of valuable information about the first ILO agreements with the Lebanese State and social partners, and about ILO activities in those early years, was lost.

Because of the difficulty of movement in the years that followed, especially regional and international travel through the Beirut Airport, the ILO central management in Geneva took a difficult decision in 1983 to temporarily relocate our operations from Beirut to the ILO headquarters in Geneva. Although the ILO received several offers for hosting the Regional Office, management insisted on keeping it in Beirut. The ILO returned to Beirut where it re-established its Regional Office for the Arab States in 1995.

Jaradat noted that today, the influx of around one and a half million refugees into the country in recent years has exacerbated an already difficult socioeconomic situation in Lebanon, with youth and marginalized groups being the most affected. To support Lebanon on in providing the quantity and quality of jobs needed for a decent life for so many, the social partners and the ILO signed Lebanon’s first Decent Work Country Programme in 2018.

This Programme constitutes a comprehensive approach to decent work which seeks to build on the numerous successes the ILO and its partners have achieved in past years, in order to reform labour governance; develop policies that generate productive employment, and extend social protection for all.
Jaradat concluded by thanking the Government of Lebanon and the social partners for their continued partnership with the ILO. She also thanked international partners and supporters who have provided funding to enable the ILO to implement vital programmes to promote decent work in Lebanon — most notably the German government, the Dutch government, the European Union, the Norwegian government and the Ford Foundation. Jaradat also thanked sister UN agencies, in particular the Office of the United Nations Special Coordinator for Lebanon, UNICEF, UNDP, UNHCR, and the World Bank, with whom we have ongoing partnerships.

Camille Abousleiman:
In his address, Lebanon’s Minister of Labour Camille Abousleiman stated that there is much work that the Ministry of Labour, the ILO and other relevant partners have in common, stressing the need to revise the Labour Law and the Social Security Law, and activate the old age pension scheme. He also highlighted the importance of creating employment opportunities for the Lebanese and benefiting from "Cedres” conference to ensure the success of these plans, in coordination with the donor governments.

Abousleiman also referred to the national policies regarding migrant workers, disclosing the efforts made regarding amending the "sponsorship Law,” drawing on the experience of a number of international organizations.

Speaking on behalf of President Aoun, he conveyed the President’s greetings to the social partners and congratulated the ILO on its centennial anniversary, saying: "A hundred years have passed in which the ILO has succeeded to carry out with its mission despite the conflicts, wars and international division. During these hundred years, there have been considerable changes in labour perceptions, patterns, basic worker rights, measures of occupational safety and health, in addition to developing international standards in the form of conventions and recommendations. A hundred years of accumulating expertise used as a mainstay for preserving workers’ rights, combating all forms of discrimination, achieving social justice and upholding freedom of association.

He said the ILO has succeeded in consolidating itself as an essential pillar in the UN, and is unique in its tripartite structure which brings together governments, employers and workers. He indicated that “this partnership must always be positive, equal and integrated, given that governments exist to serve their workers, and that employers cannot survive and progress without workers, and workers lose their employment opportunities without employers.”

Bechara Asmar:
President of the General Confederation of Trade Unions for Lebanon Bechara Asmar said there were three key labour issues that must be addressed. The first is action to rehabilitate the social contract that covers human rights to education, decent work, health and social care, old-age pension schemes, housing, transport, and the environment. The second is provision of comprehensive social protection from birth to old-age, through building a common ground for social protection that ensures protection for all, especially in the field of health and employment. The third is to ensure collective representation for workers and employers through equitable social dialogue, to enable the workers to enjoy full freedom of association and the right for collective negotiation.

He concluded that cooperation between union federations and the ILO Regional Office for Arab States in Beirut has seen greater progress in a number of basic fields, especially with regard to the assistance it has rendered about the actuarial study for the project of pension and social protection pertaining to production parties and the competent parliamentary committee.

Fady Gemayel:
For his part, Chairman of the Association of Lebanese Industrialists Fady Gemayel Gemayel said that the ILO has played a pivotal role in securing global stability, focusing its efforts on tackling the problems facing the labor market which have caused social and economic tensions in some countries. He spoke about the cooperation between the Association of Lebanese Industrialists and the ILO Regional Office for Arab States in several recent initiatives, most notably in empowering women in business and management and in developing a modern social security law.

He stated that the Lebanese economy suffers from a fundamental structural problem manifested in its inability to absorb all young workers who wish to enter the labour market, posing a strategic challenge for the tripartite labour partners. He called upon ILO to highlight to Lebanese officials and to international organizations the need to strengthen the production sectors. He also stressed the importance of launching projects that can create employment opportunities, adding that the Association is keen to achieve this aim and that it has produced a working paper on nationalizing the workforce.

Gemayel said that Lebanon is blessed with extensive and creative human resources and must consider the need to establish a new economic system which depends on global interaction and stimulating the Lebanese economy. He said it is disheartening that Lebanon’s GDP does not exceed US $52 billion - or nearly US $12,000 per capita. 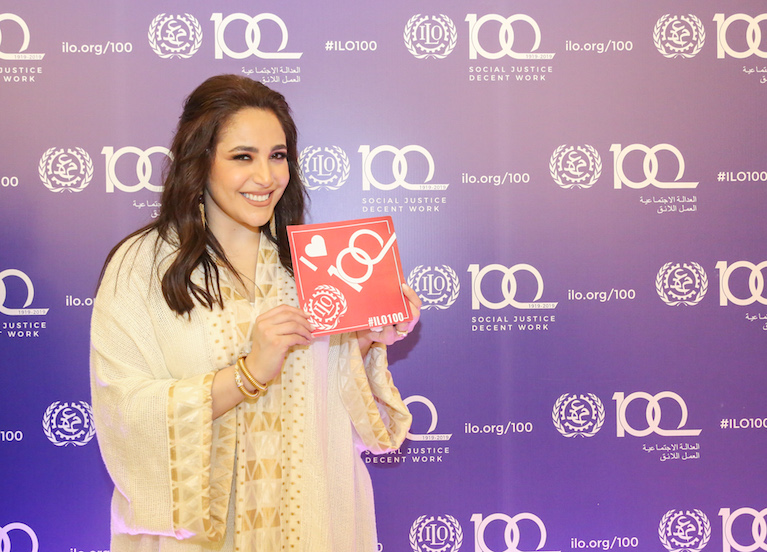