Amman, Jordan (ILO News) Syrian Fatima Al Atmah came to Jordan five years ago with her elderly mother and younger brother in search of safety and a better life.

For a long time, she worked on farms, doing seasonal work to support her family members who live in the Zaatari refugee camp, located near the northern Jordanian city of Mafraq and home to nearly 80,000 Syrian refugees.

Eight months ago, a friend at the camp told her about one of the ILO’s job centres, which had been newly set up to help residents find formal employment opportunities across different sectors in the country. She registered with the job centre, which successfully helped her find a job working at a near-by garment factory and apply for a work permit.

The job, she says, has transformed her life. She has acquired skills and made new friends. But most importantly, she says, she is enjoying the benefits of a regular income and a formal job. “I met new people; it is a different life. My life has changed because I have learnt a new profession and I can now support my family. It is good, both financially and mentally.”

Fatima is one of thousands of Syrians and Jordanians benefitting from an EU-Jordan trade scheme that relaxes “rules of origin” applied to Jordanian manufacturing goods1, allowing Jordanian companies easier access to the EU market, on condition that their production lines that produce goods for export to the EU contain a certain percentage of Syrian refugee workers.

“We are creating new job opportunities for workers who otherwise would be either employed in the informal sector or would be jobless,” said the European Union Ambassador to Jordan, Andrea Matteo Fontana. “But there are also other benefits; first of all, that Jordanian workers and Syrian workers will get the chance to work side-by-side and finally, the important possibility for workers to find decent jobs that are in line with Jordanian and ILO standards.”

Head of the Syrian Refugees Department at the Ministry of Labour, Hamdan Yacoub, said the agreement is promoting economic development in the country and helping improve the lives of community members, including Syrian refugees. “This is reflected in the employment opportunities that are being made available, as well as improvements to the social and economic welfare of members of society, including Syrian refugees. The Government of Jordan is facilitating Syrian refugees’ access to the formal and decent labour market in such a way that fulfils the needs of Jordan’s labour market.”

The ILO, through projects funded by the European Union and the Kingdom of the Netherlands, is working with the Government of Jordan, trade union representatives, industry associations, local partners, UNHCR and related agencies, to support Jordanian manufacturing firms to take advantage of their access to European markets, while helping Syrian and Jordanian workers’ finding decent work in these firms.

Maha Kattaa, ILO’s Regional Resilience and Crisis Response Specialist, said that while they have seen some good progress in the implementation of the agreement, some challenges persist.

“(One of the) challenges is finding the number of Syrian workers needed to work in these factories. Through the Employment Service Centres which were set up in different areas, Jordanian and Syrian job-seekers are being connected to job opportunities in these companies,” she added.

At present, there are thirteen employment centres across the country to help connect Jordanian and Syrian job seekers with employers. The centres provide support to over 16,000 Syrian and Jordanian job seekers and 900 employers through career guidance, training opportunities, job matching and work permit applications.

To date, 6,894 Syrian and Jordanian jobseekers, 37 per cent of whom are women, have secured work through the Dutch and the EU-funded employment service centres. A total of 55 per cent of those have found employment in manufacturing, mostly in the garment industry.2

With twelve firms so far qualifying to export under the scheme, Kattaa noted that more needs to be done for more companies to diversify their exports.

“We are helping companies reach European markets; yet, there is the lack of markets available for the goods and products being made in Jordan. It is important to find these markets [within the EU] and this is where we are helping these companies,” Kattaa said, adding that the ILO is currently working with the Jordan Chamber of Industry to connect more companies with European markets.

Ambassador Fontana also noted the potential to increase the number of companies that benefit from the trade Agreement. “There is an opportunity to realise the potential for additional trade from Jordan to Europe [as highlighted in the government's 2019-2020 priorities] and that hopefully the scheme will unlock.” 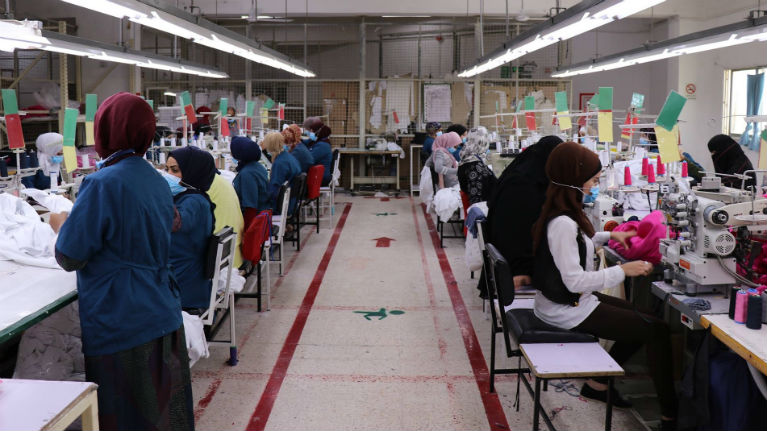