The growing and ageing economies in Southeast Asia provide increasing demand for migrant labour. But as more migrants seize this opportunity to improve their lives, women in particular can find themselves at increased risk of exploitation and abuse, including trafficking. The World Day against Trafficking in Persons gave us an occasion to remind governments and other actors of what still needs to be done to put an end to it.

Currently there are around 10 million migrant workers in the 10 countries of the Association of Southeast Asian Nations (ASEAN), nearly half of them are women, and numbers are rising. By 2030, Malaysia, Singapore and Thailand will have significant shortfalls of working-age adults estimated at 10 to 30 per cent, while Cambodia, Lao People's Democratic Republic and Myanmar will have excesses.

With the increasing demand of labour across the region, migration makes a significant positive contribution to economic and social development both in countries of origin and destination. The Asia-Pacific region is the biggest receiver of remittances worldwide, up to US$256 billion, half of which from women. This number surpasses the amount of foreign direct investment and overseas development aid in many developing countries.

Despite their economic contribution, migrant workers, especially women, still face discriminatory treatment, violence and labour rights violations. Women migrant workers are particularly vulnerable to violence and trafficking throughout the migration cycle. They are at risk of violence and abuse from intermediaries, employers, partners, and strangers as well as from exploitative labour conditions. But they often have little access to legal protection, justice and support services.

As an ostensibly protective measure, women migrant workers are frequently subject to restrictive immigration policies based on age, destination or occupation. Such restrictions do little to protect them from violence or other abuse. In fact, research by the ILO and UN Women shows they push more women to migrate through irregular and unprotected channels, resulting in increased dependence on brokers and labour recruiters.

Human trafficking – as well as forced labour - is a crime of opportunity. Victims are in situation of vulnerability as they attempt to build a better life for them and their families. It is perpetuated everywhere. In countries of origin, transit, or destination. According to the latest estimates, the overall number of reported trafficking cases has increased. Almost 25 million people are trapped in forced labour worldwide and 64 per cent of them are to be found in Asia and the Pacific.

It is estimated by some that the total profits obtained from the use of forced labour in the private economy worldwide amount to US$150 billion per year. A majority of the profits are generated in Asia, with two-thirds in this region originating from forced sexual exploitation.

While unscrupulous employers and criminals reap huge profits, victims and their families endure violence and loss. Law-abiding businesses and employers are disadvantaged as it creates an environment of unfair competition and risks tarnishing the reputation of entire industries. Governments and societies are affected by the costs involved in dealing with cases, notwithstanding the profits bypass national tax collection systems.

Steps have been taken in the ASEAN region to tackle trafficking in persons, forced labour and violence against women migrant workers. All ten countries have ratified the UN Convention Against Transnational Crime, and nine have ratified or acceded to the supplementary Protocol to Prevent, Suppress and Punish Trafficking in Persons Especially Women and Children (UN Trafficking Protocol) while only one so far has ratified the ILO Protocol of 2014 to the Forced Labour Convention, 1930 (P29). The European Union and the United Nations have set up a EUR25 million programme called ‘Safe and Fair’ through the global Spotlight Initiative to eliminate all forms of violence against women in ASEAN region by improving the frameworks that govern labour migration and ending violence against women and improving access to information and services for women migrant workers and opportunities for them to network and organize.

More comprehensive measures are required that involve not only governments, but workers, employers and other stakeholders working together to fight human trafficking. This should be linked to an early identification system of victims and their effective protection. International organizations and their networks must be utilized to provide knowledge and support in capacity development of gender responsive law enforcement as well as improve the capacity of front line officers in sectors where the risk of forced labour is high.

Labour migration can and should contribute to an inclusive and sustainable growth in the Asia-Pacific region. Criminal practices that often target women and girls threaten its development. Ensuring safe and fair migration can help lift that threat. 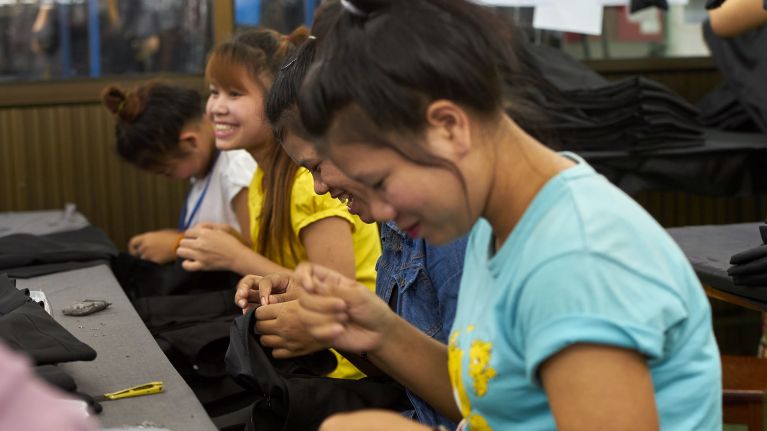