The AFML is an open platform for review, discussion and exchange of good practices and ideas between governments, workers’ and employers’ organizations, and civil society stake-holders on key issues facing women and men migrant workers in South-East Asia and to develop recommendations to advance the implementation of the principles of the ASEAN Declaration on Protection and Promotion of the Rights of Migrant Workers. The forum provides opportunity to share stakeholder activities to implement the various Recommendations from AFML meetings. Each year the AFML is hosted by the current chair of the ASEAN with support from the ASEAN Secretariat, and inputs from ILO, IOM, UN Women and the Task Force on ASEAN Migrant Workers.

15th AFML with the theme “Resumption of Labour Migration and Regional Cooperation” on 19 and 20 October 2022 in Phnom Penh, Cambodia.

The 14th AFML with the theme "Recovery and Labour Migration in the Post-Pandemic Future in ASEAN" was held in Brunei Darussalam and online on 6 and 8 September 2021.

The 13th AFML carried the theme: "Supporting Migrant Workers during the Pandemic for a Cohesive and Responsive ASEAN Community" was held in a hybrid way (offline in Viet Nam, and online with non-Vietnamese delegates) on 10th and 12th November 2020.

The 12th AFML carried the theme "Future of Work and Migration" and was held from 25 to 26 September 2019 in Bangkok, Thailand.

The 11th AFML carried the theme "Digitalization to Promote Decent Work for Migrant Workers in ASEAN" and was held from 29 to 30 October 2018 in Singapore.

The 10th AFML carried the theme “Towards Achieving Decent Work for Domestic Workers in ASEAN” and was held from 25 to 26 October 2017 in Manila, the Philippines.

The 9th AFML on the theme “Better Quality of Life for ASEAN Migrant Workers through Strengthened Social Protection” was held from 9 to 10 November 2016 in Vientiane, Lao PDR.

The 8th AFML carried the theme: ‘Empowering the ASEAN Community through Protection and Promotion of the Rights of Migrant Workers’. It was held from 26 to 27 October 2015 in Kuala Lumpur, Malaysia.

The 7th AFML carried the theme “Towards the ASEAN Community by 2015 with enhanced measures to protect and promote the rights of migrant workers”. It was held from 20 to 21 November 2014 in Nay Pyi Taw, Myanmar.

The 6th AFML carried the theme “Enhancing Policy and Protection of Migrant Workers through Data Sharing, and Adequate Access to the Legal and Judicial System During Employment Including Effective Complaints Mechanisms”. It was held from 26 to 27 November 2013 in Bandar Seri Begawan, Brunei Darussalam.

The 5th AFML was held with the theme “Protection and Promotion of the Rights of Migrant Workers: Towards Effective Recruitment Practices and Regulations” from 9 to 10 October 2012 in Siem Reap, Cambodia.

The 4th AFML made recommendations on the promotion of a positive image, the rights and dignity; and the promotion of strategies for effective return and reintegration, as well as sustainable alternatives for migrant workers. It was held from 24 to 25 October 2011 in Bali, Indonesia.

At the 3rd AFML six recommendations were made with emphasis on enhancing awareness and information services to protect the rights of the migrant workers. It took place from 19 to 20 July 2010 in Hanoi, Viet Nam.

The 2nd AFML was held with the Task Force on ASEAN Migrant Workers’ (TFAMW) to discuss the ASEAN Framework Instrument on the Protection and Promotion of the Rights of Migrant Workers from 30 to 31 July 2009 in Bangkok, Thailand.

The 1st AFML was held with the Department of Labor and Employment, Philippines from 24 to 25 April, 2008 in Manila, Philippines.

The 1st Meeting of Senior Labour Officials Working Group on Progressive Labour Practices to Enhance Competitiveness of ASEAN (SLOM-WG) was held from 30 to 31 March 2009 in Bangkok. Thailand. The Meeting agreed to institutionalize AFML as a regular activity under the ACMW Work Plan. 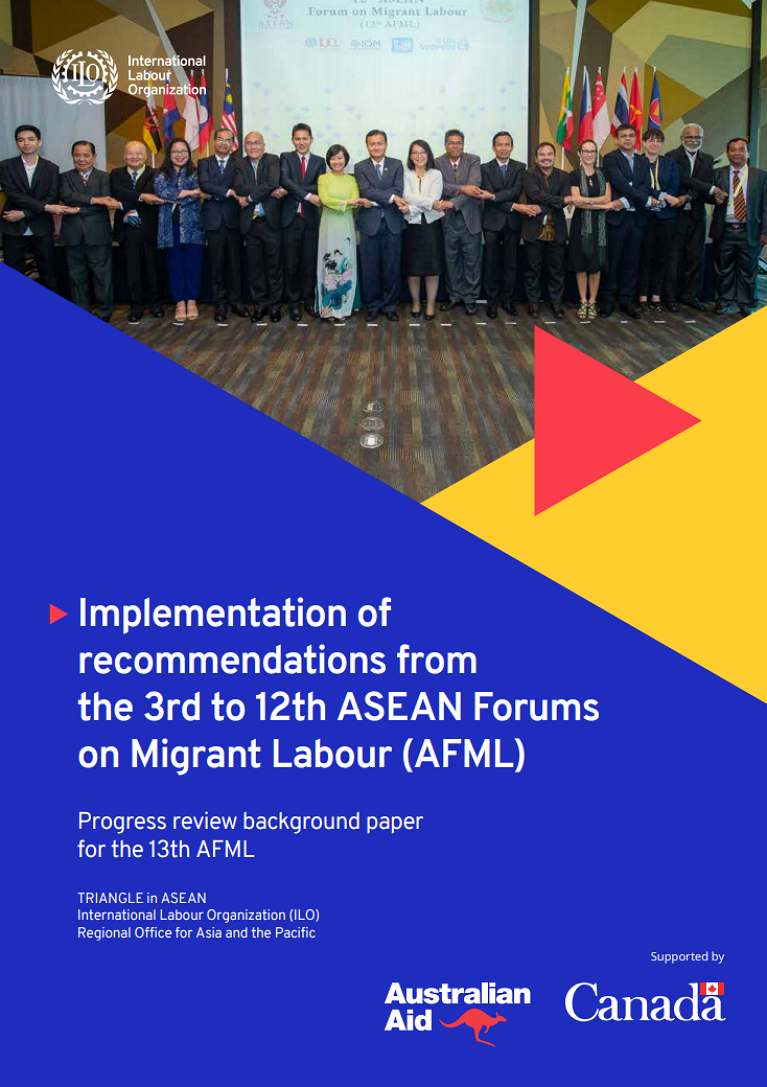 TRIANGLE in ASEAN
Skip to top