VATICAN CITY – Following a two-day seminar in Rome last week that was co-sponsored by the Pontifical Council for Justice and Peace (PCJP) and the International Labour Organization (ILO), Catholic-inspired organizations [1] declared their continuing commitment to decent work as the best way out of poverty, adopting a road map.

Forty-seven delegates from twenty-two countries, with representation from most regions of the world, gathered on 29 and 30 April 2014 to strategize on effective advocacy to place decent work at the top of the UN post-2015 development agenda and sustainable development goals (SDGs).

The seminar was held subsequent to recent comments made by Pope Francis that the human family is living with, “the consequence of an economic system which is no longer capable of creating work, because it has placed an idol at the centre that is called money”. [2] Participants engaged in serious reflection and debate on the need for a coordinated response to the appeal by Pope Francis to “… the various political, social and economic entities…to promote a different approach based on justice and solidarity ... ensuring that everyone has the possibility to carry out a dignified form of work.” [3]

“We wanted to bring a number of Catholic-inspired organizations to plan for our own input into what will be happening at the UN”, said Cardinal Peter K.A. Turkson, President of the Pontifical Council for Justice and Peace, who delivered the Keynote Address. “Sometimes as a Church we try to intervene and trust that our moral authority will carry us through, and sometimes it does, but sometimes it is also very necessary to systematically plan when we should intervene and focus on the type of work we want to see done. We want to be part of the discussion regarding the matters that impact so many people living in poverty and marginalized circumstances. We want to see poverty, slavery, and marginalization eliminated throughout the world once and for all. As Pope Francis said in a recent tweet, “inequality is the root of social evil” and it is positive to see so many organizations particularly focused on creating peace by fighting for this type of justice.”

At the close of the conference, participants insisted that access to decent work be guaranteed for all through the formulation and implementation of the new set of international development goals, including supportive conditions and economic policies. The goal is to make “decent work for all” an explicit goal of the UN post-2015 development agenda and sustainable development goals (SDGs) to work together, and in close collaboration with relevant stakeholders, to promote decent work. The text of the Road Map follows.

[2] Pope Francis, Address to the Managers and Workers of the Terni Steel Mill, Vatican City, March 20, 2014. 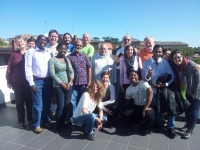