From the Director-General’s Foreword:

"... universal and lasting peace can be established only if it is based upon social justice...” The ILO’s founders were visionary indeed when in 1919 they set out the premise of this new Organization. With these words, the ILO’s Constitution recognized that peace could not be reduced to the absence of war. There was a broad understanding that it was also a matter of preserving human dignity and waging a war against want and inequity.

The ILO was born out of real life struggles for equity centred on the workplace as the heartbeat of economy and society. In work, issues of human dignity, the wellbeing and stability of families, communities and societies mesh with the productive system.

After the ravages of the First World War, the ILO represented hope and the promise of an economic system with the checks and balances that could deliver social justice with work as a principal instrument of this process. Its mission is distilled in the concept of decent work. Over the last few decades the world has experienced the upheaval of a process of globalization from which many benefitted – but too many more have not. The backlash was predictable and in the wake of the worst crisis since the Great Depression it has come to a head with more and more people feeling that they are too small to matter, that human dignity counts for little, that globalization lacks an ethical foundation. There is a growing sense of anger and disarray.

The downside of globalization is commonly experienced through the world of work – poor wages and working conditions, unemployment, underemployment, forced labour, child labour, sweat factories, diminished or no social protection, restrictions on organizing, and the list goes on.

Today, realizing decent work for all – promoting opportunities for work in ways that respect human dignity and in the context of each society – is an imperative in restoring balance and bringing human values to bear on policy choices.

When Olav Fykse Tveit, General Secretary of the World Council of Churches, and I met in 2010, we both felt that our organizations should engage in a common journey based on the conviction and knowledge that peace, social justice and the world of work were intertwined.

This handbook is the very first outcome of that encounter. We were delighted when our project was reinforced with the participation of the Pontifical Council for Justice and Peace and the Islamic Educational Scientific and Cultural Organization.

Spirituality and values are essential in the quest for a fair globalization. This handbook demonstrates that in different religions and spiritual traditions there is great convergence of values on the subject of work. Human dignity, solidarity and above all the connection between work, social justice and peace put us on common ground. There is much to inspire and guide future action.

This handbook is a first step. I see much scope for future collaboration to expedite the dawn of a new era of social justice drawing on our shared values. 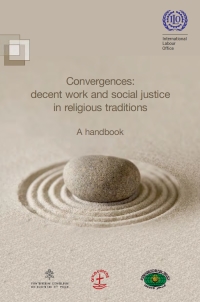