The global economic crisis has caused a sharp rise in youth unemployment. Although in recent years the labour market has gradually begun to make a recovery, it still has not returned to pre-crisis levels. Young people face a lack of decent jobs; often their rights as workers are not respected, and they receive no guarantees. This issue was raised at the 101st session of the International Labour Conference in 2012, where governments, employers’ organizations and trade unions from 185 countries were represented. At that time, it was stated that a failure to take urgent steps could result in the emergence of a “lost generation” of young people whose skills and abilities would be undervalued or lost.

In 2013, in response to the call to resolve the youth employment crisis in Eastern Europe and Central Asia, ILO launched a project that was financially supported by the Russian oil company, LUKOIL, in the CIS countries and Georgia, , with a view to developing effective solutions to reduce youth unemployment. Ultimately, a shortage of decent jobs for young people is a critical challenge for the region.

How can the efforts made by countries-participants to develop and implement national plans to promote decent work for youth, and the results thereof, be assessed? Will their practices be successful or have their peers already discovered  more effective ways to combat youth unemployment? In order to identify good practices, avoid past mistakes, and solve problems in partnership with all stakeholders, the decision was made  to try a new mechanism: peer reviews.

How do peer reviews work?

A country submits its youth employment policies and practices for review by peers from other countries. The resulting recommendations can be used to formulate specific legislative initiatives, and implemented as part of a national action plan to boost employment. 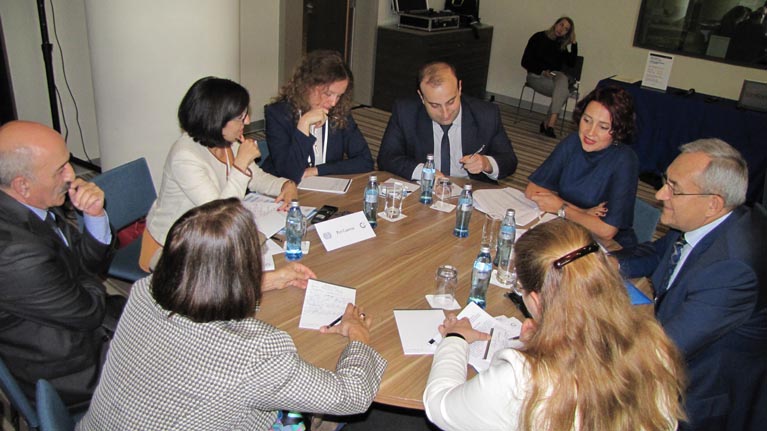 “It is a mechanism whereby country “a” reviews the policies and institutions of country “b”, while simultaneously identifying good practices. It is a way to share knowledge and experience on youth employment across countries. In this case we are dealing with a regional network for youth employment composed of nine CIS countries, with one country reviewing the policies of another on a rotating basis. This interregional/regional collaboration mechanism is an important way to gain experience, exchange information and establish collaborative relationships in countries that belong to the same region. As regards the impact of peer reviews on the youth employment policies of a given country, here are some examples: Kazakhstan has just developed a national action plan to implement youth employment policies throughout the country; at the same time, Azerbaijan has piloted a number of youth employment policies that target young people, and is now developing the relevant legal provisions, policies and institutions to replicate these efforts countrywide.”

, Senior Employment Specialist at the ILO Moscow Office, explains how the principles of tripartism are applied within the project:

“ILO is a tripartite agency. Its decisions are made jointly by representatives of governments, employers’ and workers’ organizations. The work we do is not an exception. While the major role is played by government representatives, who act as reviewers, social partners are also actively involved in consultations.”

“What we have established is a venue. The peer review process is a unique platform that allows for mutual learning on youth employment policies between countries. As part of that process, countries have the opportunity to exchange good practices, and ILO can propose policies based on good international practices. The process is such that a country under review prepares a national report, while reviewing countries conduct onsite visits, meeting the Ministry responsible for labour and employment policies and other relevant agencies, ministries, institutions, enterprises and companies able to demonstrate and share the good practices included in the national plan presented for review.

Based on the results of the onsite visit, we prepare a report to assess the country’s relevant policies before discussing all statements and findings at a special workshop attended by experts invited by ILO. There we share good practices in the area of youth employment.

The outcomes are, in part, recommendations to governments on how they can structure their policies to better serve young people who face difficulties in the labour market. I would say that policy recommendations are the main outcomes.” 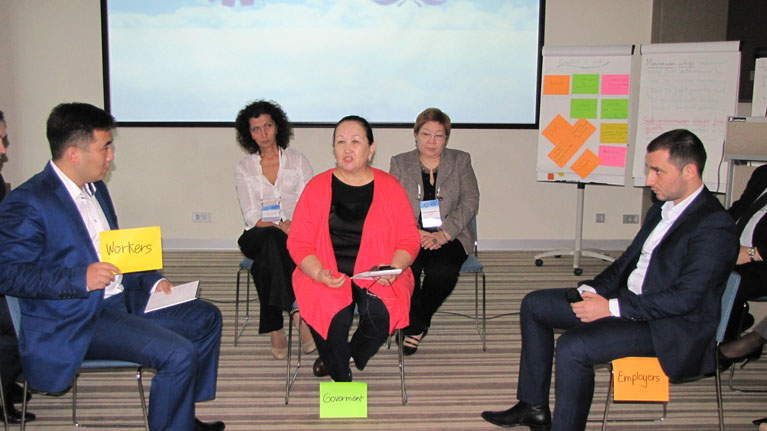 The peer review mechanism was tested for the first time in Armenia and Kyrgyz Republic, before later being used  in Azerbaijan and Tajikistan. Acting first as a reviewer, Azerbaijan then asked Russian Federation and Kazakhstan to review the youth employment situation in its national labour market. It was recommended that Azerbaijan strengthen the role of the public employment services in the country. The findings of that review were recently presented in Sochi, where a meeting of members of the Youth Employment Network took place.

<>Today it is clear that those findings will help countries to develop youth employment policies; while applying the peer review tool itself has determined the project’s success in the region.

“There are many factors that make this a success story. Perhaps the most important one is that countries gather together. They can freely exchange good practices. I believe that this platform will outlive the peer review, as it is flexible enough to be used for other purposes, including labour market discussions, social protection and other issues, as necessary.”

The Russian Federation has become actively involved in the project. While the country is addressing youth employment issues and implementing relevant employment programmes, many challenges still remain, says Andrei Sannikov, representing the Russian Ministry of Labour:

“In the Russian Federation, young people account for one third of the workforce, with high unemployment among those aged 15-19 (more than 31 percent) and those aged 20-24 (13.8 percent). While the chances of finding a job are high for those who use employment services, certain labour market discrepancies exist, such as the mismatch between skills and available vacancies. Another common labour market issue that affects young people is the lack of vacancies and the low number of new jobs. Of course, that is not an employment issue but rather an economy issue.”

The peer review mechanism is supported by pilot projects, which demonstrate that various forward-looking mechanisms could prove efficient in promoting youth employment.

“We are grateful to the ILO Moscow Office for its positive response to our requests to launch pilot projects,” says Anar Badalbayli, Head of Azerbaijan’s State Employment Service. He continues:

“The first project assumes subsidies for employers to pay a half of wages to young people with higher education. This is not our innovation. Such a programme has existed in Europe for a long time. We simply  adapted it to the local context. The second phase is intended to promote self-employment among young people with higher education in the regions. The programme would therefore expand the range of services provided by employment centres to young people and increase the number of self-employed, and, consequently, the number of young people who start small and medium businesses. Currently, the programme implemented in one of the regions assists 15 young people and continues to be a success. Some of those people are developing their own business, and we are happy with the progress. When we report to our management, we will make proposals to amend the law to implement this programme and active labour market policies. This is promising for the future.”

from the Azerbaijan Trade Unions Confederation calls on government agencies, employers’ organizations and trade unions to join efforts, as he believes it is impossible to resolve the problem of low youth employment without an effective social dialogue.

The new initiatives to reduce youth unemployment were praised by Najat Kadyrov, Executive Director of the Confederation of Employers of Kazakhstan:

«Kazakhstan is a country with a comparatively young population. Young people account for 26 percent of the population, which I believe to be to our advantage. I know many families with three or four children. Many young people are employed in the informal sector, which accounts for as much as 35 percent. Since they are employed in low-skilled jobs, the Ministry of Labour, in conjunction with social partners, employers, trade unions and ILO, which provides methodological support, has developed a National Action Plan to promote youth employment for the period until 2020. With 8 per cent of young people not in employment, education or training, we have recently observed disturbing events . The action plan is designed to address that problem. As such, we are grateful to ILO, which provided timely support to develop the National Action Plan on youth employment.”

In addition to the recommendations that countries share with one another, there is much to learn from peers. Accordingly, Kazakhstan and Russian Federation are ready to adopt the practices that have allowed Azerbaijan  to successfully combat informal employment among young people.

“The good practices identified could be replicated at the national level” says Natalya Severova from the Perm Regional Employment Agency:

“One example is Azerbaijan’s unique experience of registering employment contracts in order to fight informal employment, which is extremely relevant to each of our countries. In each, we find many such examples, and each can benefit from established good practices. Such endeavours and the financial support provided by the project to countries of the region to implement pilot activities are really helpful to develop new employment promotion strategies and practices for young people and to improve their efficiency. I believe that what we are doing with the help and financial support of the project will become sustainable and provide a new framework to improve our youth employment policies.

The principle improvements experienced in our regions primarily originate from the unique opportunity to communicate and learn from the experience conveyed by the best experts on employment, such as Valli Corbanese, Gianni Rosas, and Yordanka Tsvetkova from the ILO International Training Centre in Turin, and other experts who help us to become familiar with the knowledge accumulated worldwide.

Moreover, it is very interesting for us to engage in dialogue with representatives of the BRICS countries, who last year described in detail the employment policies of China, Brazil, and even remote South Africa. This was really exciting and enabled us to make new and non-conventional decisions in dealing with everyday issues.”

The next round of the peer review is scheduled for spring 2016. With the new tool successfully tested, ILO is developing special guidance to conduct voluntary peer reviews, which will be useful to countries already familiar with similar projects and those wishing to join this initiative in the future.