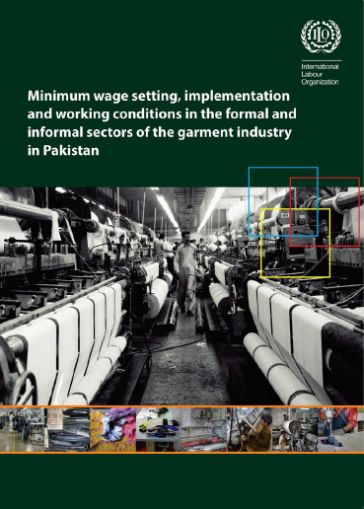 Download:
This report, drafted in 2015, analyses the legal and policy frameworks and the implementation of minimum wages in Pakistan, with a particular focus on the textile and garment sectors. The report has been undertaken by the ILO’s Labour Standards in Global Supply Chains: A Programme for Action in Asia and the Garment Sector. It also contributed to and complements the ILO’s work on minimum wage setting across the region.

The report was compiled following detailed fieldwork in Pakistan’s two major textile and garment producing provinces, Sindh and Punjab. Its findings were validated at a broad stakeholder meeting held in Islamabad in July 2015.

The structure of the report captures the legal and policy frameworks, procedures and institution involved in minimum wage setting, including a detailed analysis of the relevant legislation. There is also an analysis of the concept of minimum wages and the various factors taken into account in setting minimum wage levels. The report examines the machinery of wage setting for both unskilled work and skilled work in specific industries, as well as appointments to and the work of minimum wage boards in the provinces. Implementation and enforcement mechanisms are examined and the role of collective bargaining in wage setting is also explored.

Labour conditions in the textile and garment sector are also discussed. The roles played by international buyers and retailers, the state and collectivism are explored, alongside a discussion of the relative conditions experienced by workers in the formal sector and informal economy. The report highlights a range of different circumstances in a series of case studies.

The report outlines a series of recommendations, setting out a proposed roadmap for reform.

Minimum wage setting, implementation and working conditions in the formal and informal sectors of the garment industry in Pakistan [pdf 4759KB]