PESHAWAR (ILO News): The International Labour Organization (ILO) under its EU funded project ‘Sustaining strengthened national capacities to improve ILS compliance and reporting in relevant EU trading partners’ supported a consultation in Peshawar on 18 July, 2019. Pakistan Workers Federation (PWF) and the Pakistan Federation of Building and Wood Workers (PFBWW) jointly convened the consultation in liaison with the Department of Labour (DoL) Khyber Pakhtunkhwa (KP). Many leaders of the trade unions of construction workers participated in the event, whereas DoL Secretary Mr Khayam Hassan and Director Labour Mr Irfan Ullah Khan represented the KP Labour Department, along with their other senior and field officers.

Mr Abid Niaz Khan, National Project Coordinator of the EU funded project moderated the consultation, which highlighted the decent work deficits and unacceptable forms of work prevailing specifically in the construction sector, along with the possible remedies and solutions to the problems. While speaking about the need and importance of the contemporary consultation, he said that about 16% of the Pakistani Labour Force is associated with construction industry through direct or indirect employment, whereas the construction industry directly employs 7.6 percent of workers. Construction is, however, one of the most dangerous industries. In the developing world, construction workers are 3 to 6 times more likely than other workers to die from accidents at work. Almost 17.3% of construction workers have encountered an accident. Many more workers suffer and die from occupational diseases arising from past exposure to dangerous substances, such as asbestos. Construction workers being part of the informal economy, enjoy limited access to legal entitlements, social security and statutory benefits etc.

Mr Irfan Ullah Khan, Director Labour-KP presented the legal entitlements of construction workers as stipulated in the labour laws. He informed the audience about flexibility clauses in the labour laws through which the labour laws can be extended to any category of workers by simply issuing a notification. He further said that most of penalties for contravening labour laws have been linked to minimum wage, whereas the proposal to induct dedicated labour inspectors for the construction sector was also on the cards.

Mr M. Aslam Adil, General Secretary (PFBWW), highlighted the problems confronted by the construction workers. He pointed out gaps in the adequacy and implementation of laws and emphasized the need for formalizing the construction industry and protecting the workers employed similar to what has been done by other countries. He said that labour laws extend to workers of the formal sector where the employer-employee relationship is clear, whereas the daily wage earners keep on moving from one job to another and it is difficult to maintain their employment record at different places. He called for sector specific legislation and setting up of a dedicated office within the labour directorate for regulating the working conditions, provide social security and arbitrate disputes between workers and employers. He also proposed upfront collection of cess from every contractor at the time of award of construction contract. Such cess may then be matched by fund manager or the Government to pay for worker welfare, social security and employee old age benefits etc. He also spoke about the problems around freedom of association (FoA) and collective bargaining (CB) confronted by workers employed in multinational construction companies and suggested that the labour inspectors should have free access to all working premises within the province. He also proposed the expansion of Provincial Tripartite Consultation Committee (PTCC) to include the representation of construction workers.

Mr Zahoor Awan, General Secretary, PWF in his welcome address said that rule of law, as far the labour laws are concerned, can be bettered either through improving the formal justice system or through improving the freedom of association and collective bargaining. The latter option is easiest, informal, most efficient and cost effective and should therefore be promoted and propagated. The effective tripartism carries enormous potential of ensuring industrial peace but the pre-requisite to effective tripartism is freedom of association, social dialogue and collective bargaining. He called for changes in the laws and practical measures for easing the registration of trade unions particularly of the workers employed in mega construction projects.

Mr Khayam Hassan, Secretary Labour-KP in his address said that his department would soon call a meeting of employers from the construction sector, so as to kick start a dialogue for possible provision of better working conditions for workers, especially with respect to implementation of minimum wage, payment of wages and benefits etc. He also informed the audience that a new law on occupational safety and health has been drafted, whereas the Department of Labour would soon introduce mobile labour inspection units in the province. He also said that the labour department would seriously consider all proposals tabled during the consultation towards ameliorating the provincial labour laws and their implementation and the necessary institutional and administrative reforms for bettering the working conditions in the construction industry.

Ms Ingrid Christensen, Country Director for ILO Pakistan in her vote of thanks said that most of current OSH (Occupational Safety and Safety) legislation does not extend its scope to certain sectors including the construction sector. The window of opportunity for KP is its OSH law, which is in the process of enactment. She said that ILO is happy to today’s consultation that is in line with the Decent Work Country Programme’s outcome, which calls for protecting the workers from unacceptable forms of work. She also traced back the linkages of the consultation to ILO’s normative work. She informed the audience that ILO has long sought to protect the safety and health of construction workers through the development and promotion of Conventions, Recommendations and Codes of Practice. The Safety Provisions (Building) Convention (No. 62) was adopted as long ago as 1937. It was superseded in 1988 by the Convention on Safety and Health in Construction (No. 167) and its accompanying Recommendation (No. 175). A Code of Practice on Safety and Health in Construction was adopted in 1992. The Asbestos Convention (No. 162) and its accompanying Recommendation (R. 172) which were adopted in 1986, are also of particular relevance to the construction sector. Ms Christensen also informed about ILO’s support to KP Labour Department in compiling all the provincial labour laws into one book. She proposed that national and provincial labour laws could be translated in relevant languages particularly for workers, contractors and employers for their better understanding and adherence. Ms Christensen while responding to a request assured that ILO would support similar dialogues in other provinces if there is need. Finally, she encouraged the convening of tripartite consultations towards bettering the working conditions in the construction sector. 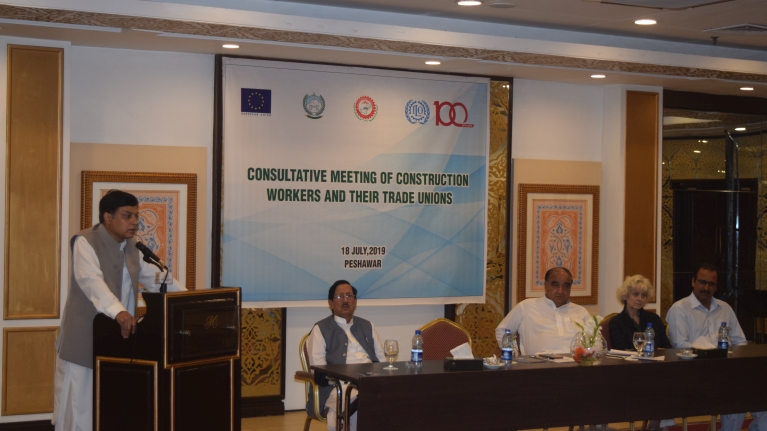