KARACHI (ILO News): The ILO under its project on Strengthening Labour Inspection System in Pakistan (SLISP) funded by the Dutch, supported the Labour and Human Resources Department of Sindh in launching an awareness raising campaign on OSH in the Construction Sector of Karachi. The campaign design and its implementation was an outcome of the recommendations that the stakeholders ascertained in a tripartite plus consultation on 10th April, 2018 at National Institute of Labour Administration and Training (NILAT) Karachi. The consultation that brought together the representation from labour inspectorate, workers, employers, academia and the civil society organizations advocated improvement in the information and sensitivity towards OSH related risks and hazards in the construction sector.

The awareness raising campaign on OSH in the Construction Sector of Karachi was implemented from 12th to 16th November 2018. During this campaign a variety of construction sites across Karachi were visited including high-rise commercial buildings, residential blocks, roads, bridges, underpasses and metro transport. A set of seven teams consisting 16 technical labour inspectors of the Labour and Human Resources Department of Sindh visited 66 construction sites. The teams carried out on site awareness raising sessions with workers, site supervisors and employer representatives and attempted to enhance the information and sensitivity regarding OSH related risks and hazards in the construction sector. The teams distributed vernacular informative posters amongst the audience and also provided the copies of Sindh OSH Act that provides legal coverage of OSH to almost every sector of the economy.

Before embarking upon this campaign, a two-day training was organised for selected labour inspectors in order to help them enhance their understanding about:
a) objectives of this campaign,
b) labour inspection in the construction sector e.g. checklist, IEC material to be used during the campaign and
c) the standard responses to OSH related situations on the sites.
This training also included a mock site inspection for practical demonstrations.

During these visits, the labour inspectors attempted to enhance awareness in the following areas identified as priority:

The campaign helped in gauging the severity of OSH risks at construction sites which could be attributed to:
i) lack of sensitization on the part of employers, contractors and workers,
ii) employers misunderstanding about the cost implications of OSH risk mitigation and
iii) workers inability to appreciate the use of Personal Protective Equipment.

The teams met every evening upon completing the field visit and exchanged lessons. The campaign concluded on 16th November 2018. Participants excitedly enumerated the following achievements that reflect the pro-activeness of the province in improving OSH standards: 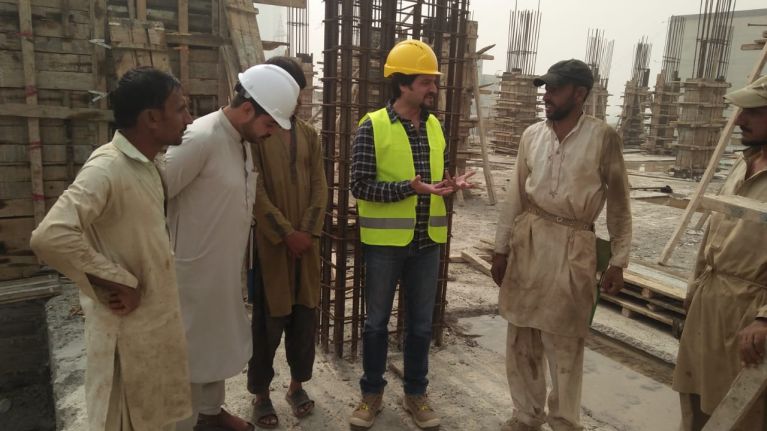