KARACHI (ILO News): The devolution of the subject of labour to provinces through the 18th Amendment to the Constitution has enabled the provinces to contextualize and re-enact the labour laws. The province of Sindh has formulated 14 new labour laws through a tripartite consultative process. For effective implementation of these labour laws, the province initiated the process of framing new Rules.

As part of this process, the Sindh Labour and Human Resource Department organized a second phase of consultation with the technical and financial support of International Labour Organization through its International Labour and Environmental Standards project, funded by the European Union, and the German funded project on Labour Standards in Global Supply Chains. The process was also supported by the ILO Country Office Islamabad and the ILO’s technical specialist on International Labour Standards, Ms Miranda Fajerman. Representatives of workers, employers and civil society participated in the consultation.

Workers’ and employers’ representatives appreciated the Government of Sindh for enabling the process of social dialogue and congratulated the Department of Labour on the completion of the consultative process.

During the consultation, the participants worked in groups which allowed exchange of views and opinions and consented on inputs to the drafting process and suggested practical recommendations for the effective implementation of laws under consideration

Workers Representatives in consultative group recommended some important amendments including equal nomination from workers and employers sides in Workers Management Council, use of birth certificate /NADRA registration forum as a primary mean for age verification and at least 30% representation of women in vigilance committees to monitor bonded labour.

Mr Fasihul Karim Siddiqui, representing the Employers’ Federation of Pakistan, agreed that the Sindh Bonded Labour (Abolition) Act 2015 does not fully address bonded or forced labour in the province. He stressed the government should pursue amendments in the Act and derive the definition of bonded and forced labour as stated in ILO Conventions Forced Labour Convention, 1930 (C. 29) - and Abolition of Forced Labour Convention, 1957 (C. 105) - to be included in the law. 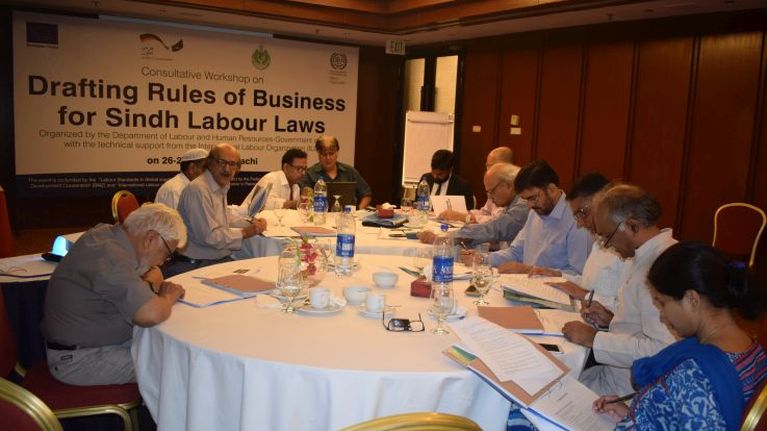 Labour standards in global supply chains: A programme for action in Asia and the garment sector in Pakistan International Labour and Environmental Standards Application in Pakistan’s SMEs (ILES)
Skip to top