Lahore (ILO News) - The thirteenth batch of the National Labour Inspectors’ Training Program was completed on 29th March, 2018 in Lahore in collaboration with the Department of Labour Punjab. A total of 27 participants including 2 women attended the training that aimed at improving theoretical and practical competencies of the labour inspectors on a) labour inspection regulatory frameworks, b) Fundamental Principles and Rights at Work [FPRW] and c) contemporary labour inspection methodologies/skills.

Mr Farooq Hameed Sheikh, Director General Labour Welfare Punjab, addressing the concluding ceremony thanked the International Labour Organisation (ILO) for its technical assistance and the Netherlands Government for financial support focusing on the much sought after capacity building of the inspection staff. Mr Sheikh, urged the inspecting staff to maximize the application of knowledge and motivation gained from the training program as this would serve to enhance labour law compliance. Whilst concluding his address, he loudly requested the ILO for continuation in the ongoing technical support to the Labour Inspectorates especially in areas of Labour Inspection of OSH.

On the occasion, Mr Zishan Ahmad Siddiqi, National Project Coordinator for the Project on Strengthening Labour Inspection System in Pakistan (SLISP) stated that the ILO’s capacity building support was designed to augment the government’s departmental training endeavours. Mr Siddiqui further added that it is in this larger interest that SLISP had produced a technical content based toolkit for Labour Inspectors that should be a good resource for government’s induction training of labour inspectors.

The ILO’s Dutch funded project on SLISP is implementing a nationwide training program for labour inspection staff. The training program so far has successfully completed 13 cohorts in which a total of 358 inspecting staff [343 men and 15 women] from Balochistan, Sindh, Khyber Pakhtunkhwa, AJK, ICT, GB and Punjab have received a three days orientation training on “Effective Labour Inspection”. 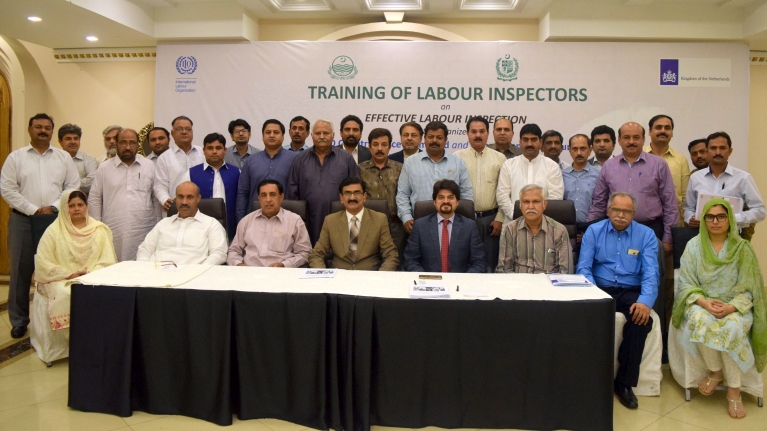