LAHORE (ILO News): The 3rd batch of Labour Inspectors’ Nationwide Training Program was completed on 1st March, 2018 in Lahore. The training that was attended by 29 participants (26 men and 3 women) labour inspecting staff, was organized in collaboration with the Department of Labour and Human Resource, Government of the Punjab. This is part of the series of trainings aimed at improving theoretical and practical competencies of the labour inspectors in areas of a) labour inspection regulatory frameworks, b) Fundamental Principles and Rights at Work (FPRW) and c) contemporary labour inspection methodologies/skills.

Mr Farooq Hameed Sheikh, Director General Labour Welfare Punjab, addressing the concluding ceremony, thanked the International Labour Organisation (ILO) and the Netherlands Government for joining hands to extend this much needed capacity building support. Referring to the internal feedback that the Department of Labour Punjab gathered from the participants’ of two earlier batches, Mr Sheikh lauded the relevance of the training contents covered, effectiveness of adult learning methodologies employed and the ILO’s technical competence rendered. Addressing the participants, he stressed that upon receiving a training that has been meticulously tailored to their capacity needs, it was only fair for the inspectorate to expect an elevated quality of inspection in the field. Mr Sheikh also requested the ILO to continue extending its technical assistance to the Department of Labour until its own training apparatus starts delivering quality trainings like this.

ILO’s Dutch funded SLISP project is implementing a nationwide training program for labour inspection staff that so far has successfully completed 12 cohorts in which a total of 331 labour inspectors [318 men and 13 women] from Balochistan, Sindh, Khyber Pakhtunkhwa, AJK, ICT, GB and Punjab have completed a preliminary training on Effective Labour Inspection. 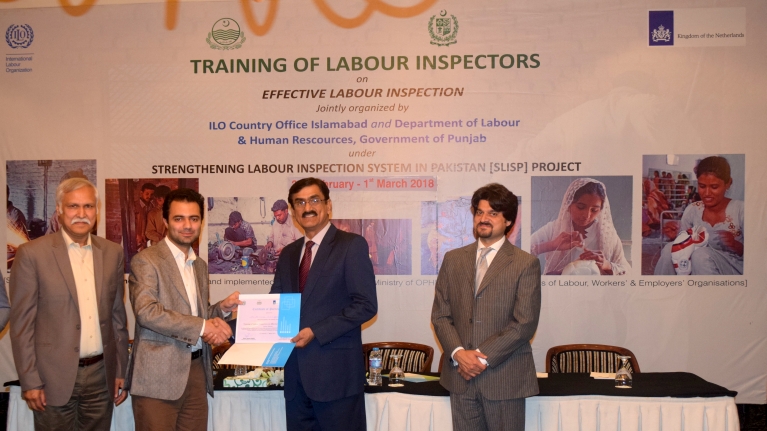