KARACHI (ILO News): The ILO brought together government, employers and union representatives from Sindh and Balochistan to explore successful collective bargaining and bipartite negotiation structures and practices in a four-day workshop from 8-11 January 2018 held in Karachi.

The workshop aimed at enhancing participants’ capacity in engaging in meaningful collective bargaining and negotiation processes. The four-day training workshop, which concluded on Thursday (January 11), was organized by the BMZ funded Project on Labour Standards in Global Supply Chains, in collaboration with the International Training Centre of the ILO (ITC/ILO).

While collective bargaining is essentially a bipartite process involving employers and workers organizations, governments can play an important role in ensuring an enabling environment for collective bargaining and moving the process forward. Mr Muhammad Rashid, Secretary, Department of Labour, Government of Balochistan, shared his views on the opening of the workshop stating that ‘’Governments should take a role of a mediator between the two sides and help find solutions to difficult problems’’.

Mr Karamat Ali, Executive Director of PILER, said that “Rather than having multiple isolated agreements among factories and unions, having one collective bargaining agreement that governs the sector, will help trade unions operate under one common voice and one common interest.’’

Ms Rabia Razzaque, National Project Coordinator, explained that the project has hoped that the event would help bring greater attention to a topic that is too often undervalued. The skills knowledge and capacity of those negotiating on behalf of employers and workers organization in collective bargaining are critical in preventing labour dispute and achieving outcomes and agreement that meet the interests of the parties involved. The effectiveness of the collective bargaining process is often hampered by poor negotiating skills of the bargaining parties.

She also said that the workshop built on the training on Wage Policy held recently in December 2017. The Wage Policy training attended by tripartite partners representing Minimum Wage Boards and Provincial Tripartite Consultative Committees also emphasised on the importance of consensus based approach for wage determination, wage setting, monitoring and compliance.

During the workshop, ILO trainers shared examples of how collective bargaining and joint negotiation have improved the living and working conditions of workers, as well as the economic performance of industries across the globe. They also shared knowledge on ways to deepen and promote negotiation in different countries and sectors.

Sylvain Baffi, Programme Officer at ITC/ILO emphasised that it is important to move from traditional negotiation style of adversarial negotiations, to a negotiation style that allows for mutual gains and strengthens relationship between the bargaining parties of employers and workers association.

Concluding the event, Ms Belinda Chanda, Officer In-Charge of the ILO Country Office in Pakistan stressed that freedom of association and collective bargaining were basic rights of workers and employers enshrined in the normative framework of International Labour Standards and in particular Conventions no. 87 (1948) and no. 98 (1949) ratified by Pakistan. They ensure that workers and employers can dialogue to effectively negotiate and improve working conditions and working relations as a means of promoting industrial harmony.

A similar workshop will be delivered for tripartite constituents in March 2018 for provinces of KPK, Gilgit-Baltistan, AJK and the ICT.

The ILO is currently implementing a number of projects across the Asia Pacific Region aimed at promoting fundamental principles and rights at work, through increasing the capacity of partners in areas such as labour dispute management, collective bargaining and social dialogue, in efforts to enhance sound industrial relations in various sectors. 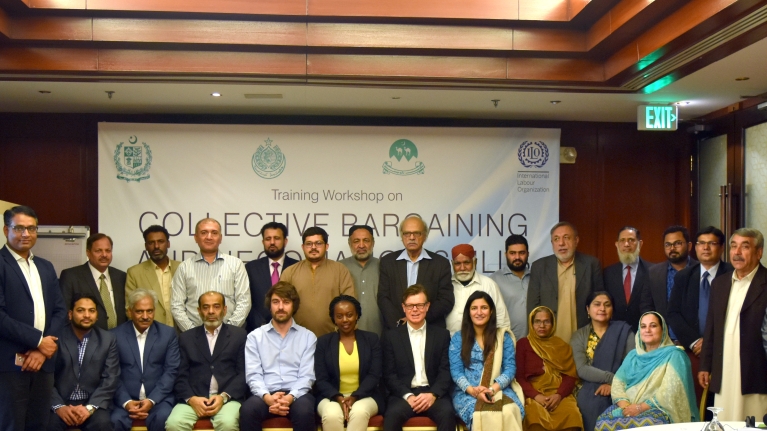