SIALKOT (ILO News): The ILO supported the Employers’ Federation of Pakistan (EFP) and the Pakistan Sports Goods Manufacturers & Exporters Association (PSGMEA) in organizing a series of six workshops on Occupational Safety and Health (OSH) from 6 -10 November 2017 in Sialkot.

The workshops enhanced awareness on OSH standards at enterprise level, focusing on the growing OSH needs of the industry and the market. In total, 187 participants representing 41 companies were sensitized and their knowledge on how to implement OSH measures in a practical fashion was strengthened.

The concluding ceremony took place on the 10th of November 2017 and Mr Hasnain Cheema, Chairman, PSGMEA expressed his gratitude to the ILO, the EFP and the Government of Japan for selecting the sports goods industry of Sialkot to conduct trainings on such an important topic. He reiterated the need for continued support on this issue and expressed the hope that collaboration between the workers and the employers would be instrumental in manifesting good results and dividends for the both. He requested the ILO and other relevant stakeholders of the sports goods, to play a positive role in further strengthening the sports goods industry in enhancing business and application of international standards to enable the industry competitive in the international market.

Mr Fasihul Karim Siddiqi, Secretary General, EFP in his remarks congratulated the participating companies for successfully organizing factory based workshops, which was a unique venture executed for the first time in the sports goods industry in Sialkot. He hoped that these efforts would lead to improving the sustainability and competitiveness of the industry in the global context. These efforts would not only benefit the participating companies in improving the brand image of the industry but would also attract the attention of the foreign investors to invest in this industry which has an immense potential in Pakistan.

Mr Tsuyoshi Kawakami, Sr. Specialist on OSH from the Decent Work Technical Support Team for South Asia, New Delhi, who technically facilitated the workshops as a trainer, appreciated the active interaction between the participants who represented administration and workers. He said that it is a bilateral manifestation of commitment by the administration and the workers, to uphold and improve high OSH standards in their respective companies and organizations.

Ms Ingrid Christensen, Director, ILO Country Office for Pakistan in her address appreciated the large and active participation of management, supervisors and workers in these workshops and suggested that the good practices that had emerged during the workshops could be showcased as an inspiration for other companies in the efforts to promote sustainable and responsible business. She also expressed the expectations that the action plans developed by the participants would be implemented by the companies, thereby contributing to opening new avenues of opportunities for the Sialkot sports goods industry.

The workshops were organized under the ILO’s Project on “More and Better Jobs through Socially Responsible Labour Practices in Asia (Pakistan) – Phase II”, funded by the Government of Japan. The project aims to strengthen socially responsible labour practices in the sports goods industry in Sialkot and raise awareness on the principles of the Multinational Enterprises and Social Policy (MNE) Declaration. 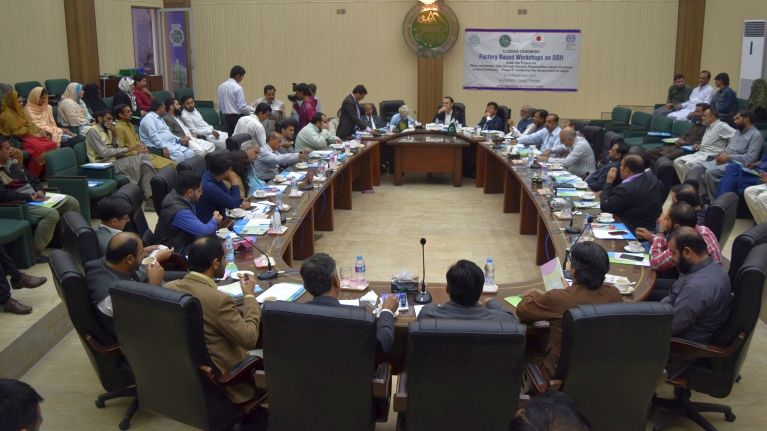