MUZAFFARABAD (ILO News): The ninth cohort of the National Labour Inspectors’ Training Program took place on 21st September, 2017 in Muzaffarabad with the financial and technical support of the Dutch funded project on Strengthening Labour Inspections in Pakistan (SLISP). The three-day training on ‘Effective Labour Inspection’ brought together 15 labour inspectors and was organised in collaboration with the Departments of Labour AJK, ICT and GB. The objectives of the training was to improve the theoretical and practical competencies of the labour inspectors regarding a) labour inspection regulatory frameworks, b) Fundamental Principles and Rights at Work (FPRW) and c) contemporary labour inspection methodologies/skills.

Speaking during the opening session, Ms Noreen Arif, the Honourable Minister for Labour AJK, welcomed the participants from GB, ICT and AJK and reiterated the importance of labour inspection in promoting labour rights. She proposed that the effectiveness of labour inspection system in Pakistan could be improved by decreasing the current human and financial resource deficit under the inspectorate system, institutionalizing user-friendly labour inspection tools, addressing the data management and enhancing the provision of training to Labour Inspectors. The Honourable Minister also appreciated the well-timed support of the ILO and described the training as a step closer towards promoting labour law compliance. Ms Arif also thanked the Dutch Government for its commitment towards improving the labour inspection regime in Pakistan through the provision of financial resources for the training.

Mr Raja Ghazanfar Ali Khan-Director for Commerce and Labour AJK and Mr Shah Jahan-Director Labour GB in their opening remarks appreciated the training as a means of improving the competencies of inspectorates to efficiently carry out labour inspection.

Mr Zishan Siddiqi-National Project Coordinator for the SLISP project stated that having a stronger Labour Inspection System as a means of promoting labour laws compliance was an essential condition for preventing catastrophic industrial accidents, safeguarding labour rights and improving industrial harmony in a country. 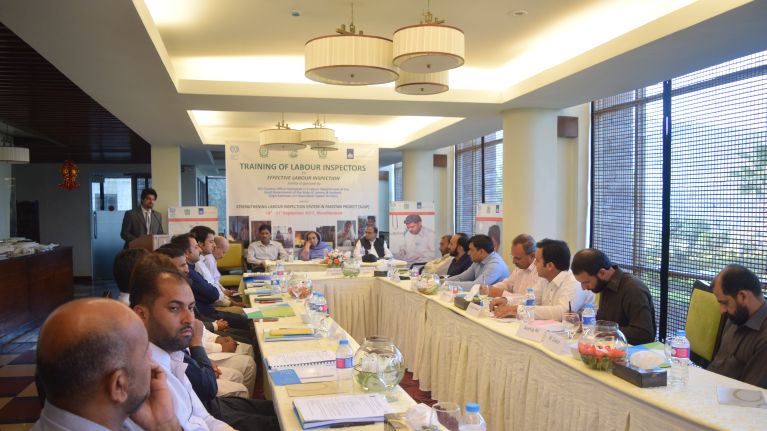