Quetta (ILO News): The International Labour Organization (ILO) is supporting the Government of Balochistan to enact a number of labour laws. The Government is making efforts to formulate or strengthen the legislation particularly in the areas of child labour, freedom of association and collective bargaining, and setting of minimum wages, through the review and reform of various labour laws, which in turn will strengthen the application of international labour standards (ILS).

Three days of technical consultations took place in Quetta, followed by a special meeting of the Provincial Tripartite Consultation Committee (PTCC). Labour welfare and law department officials participated in the technical discussions with the purpose of ensuring application of fundamental labour rights of workers in line with ratified ILO Conventions. ILO team comprising Ms Miranda Fajerman, ILO ILS Specialist and Mr Abid Niaz Khan, National Project Coordinator for the GSP+ Project) provided technical advice to the consultations. The Balochistan Industrial Relations Act (BIRA), Minimum Wages Bill, Payment of Wages Bill and Prohibition of Employment of Children Bill were reviewed in light of current practices, challenges, ILS, and observations of ILO supervisory bodies. These technical discussions build on position papers produced earlier on provincial labour laws by the social partners and also the outcomes of tripartite consultations in Islamabad and Karachi, which looked at provincial legislation in the post devolution scenario.

Outcomes of the technical discussions were tabled yesterday to the PTCC, where very healthy social dialogue took place among the tripartite stakeholders. Mr Shuja ul Mulk Gichki, Director General of Labour Welfare, Balochistan mentioned that his office will circulate the draft laws along with the technical inputs received so far to the PTCC members and a follow-up meeting of PTCC will be convened after Eid-ul-Fitr, so that the final draft of laws could be drawn and endorsed by the PTCC. The final drafts will then enter into further legislative process. Ms Ingrid Christensen, Country Director for ILO Pakistan, while speaking over the occasion, emphasized the need for laws that are comprehensive and well-formulated, so as to ensure effective labour protection at work, consistency across the different laws and also the need for inter departmental coordination for holistically protecting the workers and preventing child labour in Balochistan.

The technical discussions and PTCC meeting were arranged by a technical cooperation project funded by the European Commission with the purpose of supporting the governments in Pakistan to sustain the GSP+ facility, which was granted to Pakistan in January, 2014 for a ten years term conditioned to better compliance and reporting of 27 UN Conventions including 8 core labour Conventions.

The 18th Constitutional amendment had necessitated that all provinces enact their own laws on devolved subjects. Rational and ILS compliant labour legislation is an important means towards ensuring the protection of labour rights and ILO has been providing technical assistance and coordination to various provinces to complete their first cycle of labour legislation. 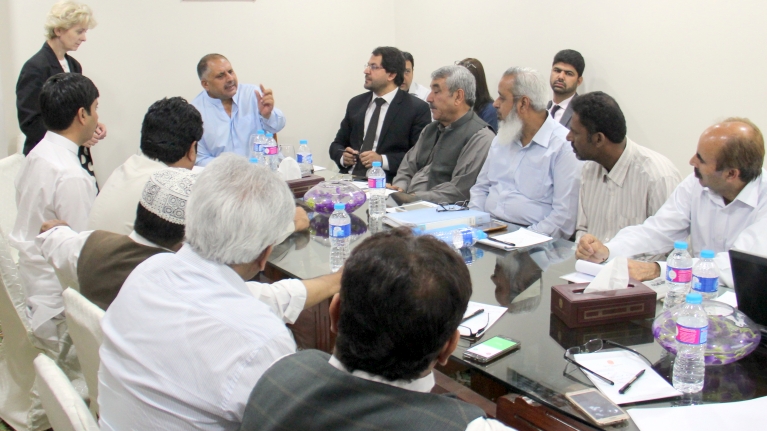