KARACHI(ILO News): Every year worldwide 28th April marks World Day for Safety and Health at Work. This year was commemorated under the theme “Workplace Stress: a collective challenge”. In Pakistan this day was marked by ILO and its constituents through an event hosted by the Employers Federation of Pakistan (EFP) in Karachi to reaffirm the tripartite constituents’ commitment towards the common goal of safer workplaces in Pakistan.

Speaking to the occasion Mr Abdul Rasheed Solangi, Secretary Labour Sindh informed the audience that thirteen Labour laws had already been prepared and sent to Sindh provincial assembly for legislation. He stressed that Sindh would be the first province with specific laws dealing with the issues of Health & Safety. According to Mr Solangi, these laws will setup the guideline for the stakeholders to concentrate on the development of a health and safety culture conducive to industrial growth. The Secretary labour Sindh also announced that under the directives of Minster for Labour Sindh, a special task force for the effective implementation of the labour laws has been constituted under the leadership of Director Labour. Mr Solangi also stated that a disaster response mechanism is being developed in the Province for the prevention of losses and damages occurring due to industrial accidents and emergencies.

Ms Ingrid Christensen, Country Director ILO Pakistan emphasized on a more collaborative role of Tripartite Constituents to strengthened OSH efforts. She also accentuated the role of effective OSH management systems as a preventive tool for securing the lives and dignity of workers. Ms Christensen, emphasised that the promotion of OSH must be an integral component of labour strategies to ensure the safer workplaces, essential for the promotion and realization of decent work.

Mr Zahoor Awan, Secretary General, Pakistan Workers Federation in his speech highlighted that Health and Safety is a common agenda of employers and workers and called upon the government to take notice of the health and safety situation in the construction and transport sectors among others.

Earlier, Mr Khawaja Muhammad Nauman, President, Employers’ Federation of Pakistan (EFP), in his welcome address gave a detailed account of the initiatives taken by the EFP during the last eleven years for inspiring business to develop health and safety culture at enterprise level. He also announced the launch of the Urdu version of OSH&E training from May 2016.

Mr Arif Elahi, the then Secretary labour Sindh and now Chairman, National Shipping Corporation, in his address on the occasion, lauded the marathon efforts of ILO and its tripartite constituents in taking up the cause for promoting initiatives like safety and health at the workplace . 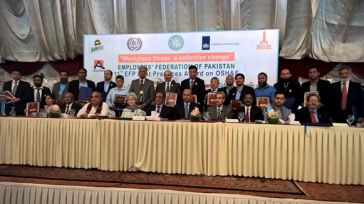