HANOI (ILO News) – While women are still under-represented in top management, the number of women in senior and middle management positions has increased over the last 20 years, a new study by the International Labour Organization finds.

According to Women in Business and Management: Gaining Momentum, women’s percentage share of all managers ranges from 2.1 per cent in the lowest-ranked country of Yemen to 59.3 per cent in Jamaica, which tops the list of 108 countries. Viet Nam ranks 76th with 23 per cent of women in business management.

In Asia, the highest ranking country is the Philippines in 4th place (47.6 per cent), followed by Mongolia with 41.9 per cent in 17th place.

As the proportion of women managers has increased over the past years in most of the countries where the ILO has available data, Viet Nam has also recorded a slight improvement. Also according to Viet Nam’s Labour Force Surveys, the share of women among “leaders, managers and administrators” increased by 0.5 per cent to 24.4 in 2013 compared to 2012 and 0.6 per cent between 2011 and 2012.

“Our research is showing that women’s ever increasing participation in the labour market has been the biggest engine of global growth and competitiveness,” says Deborah France-Massin, Director of the ILO Bureau for Employers’ Activities.

“An increasing number of studies are also demonstrating positive links between women’s participation in top decision making teams and structures and business performance. But there is a long way to go before we achieve true gender equality in the workplace, especially when it comes to top management positions.”

Only 5 per cent or less of the CEOs of the world’s largest corporations are women, the ILO report shows. The larger the company, the less likely the head will be a woman.

In Viet Nam, data from Global Women CEO Project under the France-based organization – Intelligence Financial Research and Consulting – indicate that 7 per cent of the CEOs among more than 600 surveyed companies are women and female board members account for 14 per cent.

“It is critical for more women to reach senior management positions in strategic areas to build a pool of potential candidates for top jobs such as CEO or company presidents,” explained France-Massin. “However, ‘glass walls’ still exist with the concentration of women in certain types of management functions like HR, communications and administration,” she added.

Today, women own and manage over 30 per cent of all businesses globally (29.5 per cent of employers in Viet Nam are women, according to the 2013 Labour Force Survey), but they are more likely to be found in micro and small enterprises. Getting more women to grow their businesses is not only critical for equality but also for national development, shows the report.

The authors underline that women and girls receive almost half of all educational resources, thus representing a significant proportion of the available talent pool. The case of Viet Nam is no different. UNESCO data indicate that among those with tertiary education, women always outnumbered men in the period between 2007 and 2011.

There is also evidence of the benefits to business of tapping into the talent pool that women represent – including being in tune with a consumer market increasingly driven by women. As women often control household budgets and financial decisions and their purchasing power has increased, they are significant consumers and clients of products and services. Therefore, decision-making roles in enterprises should be represented by both women and men.

“Supporting women to advance in their career is not only an issue of gender equality but also makes good business sense,” said ILO Viet Nam Director Gyorgy Sziraczki. “Promoting the diversity in management by having more women in top positions is key to increase companies’ productivity and competitiveness, thereby seizing the economic and social benefits of the country’s deepening integration.”

The report also provides the following recommendations for companies to close the remaining gender gap:

• Seeking “flexible solutions” to manage work and family time commitments;
• Expanding the coverage of maternity protection and providing childcare support is key to attracting and retaining talented women;
• “Changing mind-sets” to break cultural barriers and fight sexual harassment;
• Addressing the fact that women fall behind despite their high level of education;
• Implementing gender-sensitive human resources policies and measures;
• Making sure women are given as challenging tasks as men from the very beginning of their career;
• providing young women with mentoring schemes and “sponsorship” by someone high up in the company and networking opportunities.


Finally, the report says national employers’ organizations can play a major role in increasing awareness of the business case for appointing women in leadership roles. 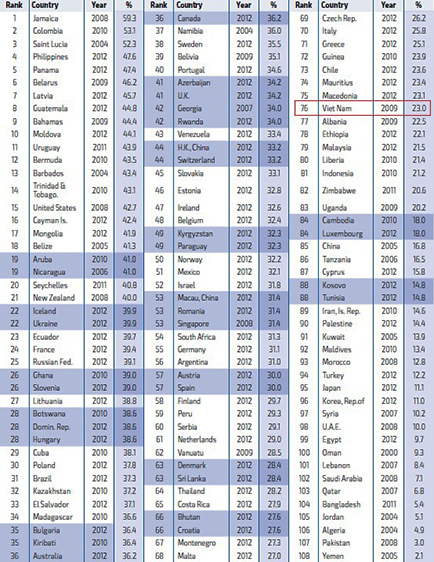