Even this modest growth in global wages was driven almost entirely by emerging G20 economies, where wages increased by 6.7 per cent in 2012 and 5.9 per cent in 2013.
By contrast, average wage growth in developed economies had fluctuated around 1 per cent per year since 2006 and then slowed further in 2012 and 2013 to only 0.1 per cent and 0.2 per cent respectively.

“Wage growth has slowed to almost zero for the developed economies as a group in the last two years, with actual declines in wages in some,” said Sandra Polaski, the ILO’s Deputy Director-General for Policy. “This has weighed on overall economic performance, leading to sluggish household demand in most of these economies and the increasing risk of deflation in the Eurozone,” she added.

For example, in 2013, wages grew by 6.0 per cent in Asia and 5.8 per cent in Eastern Europe and Central Asia but only 0.8 per cent in Latin America and the Caribbean.
In the Middle East, wages appear to have advanced by 3.9 per cent, but only by 0.9 per cent in Africa, however the data for these regions is still incomplete.

Labour productivity – the value of goods and services produced per person employed – continues to outstrip wage growth in developed economies, including in the most recent years. This continues a longer trend which briefly paused during the financial crisis years of 2008 and 2009.

The growing gap between wages and productivity has translated into a declining share of GDP going to labour while an increasing share goes to capital, especially in developed economies.
This trend means that workers and their households are getting a smaller share of economic growth while the owners of capital are benefitting more.

The report includes a detailed analysis of recent trends in household income inequality and the role played by wages in these trends.

Wages are a major source of household income in developed, emerging and developing countries alike, particularly for middle income households, while the top 10 per cent and bottom 10 per cent depend somewhat more on other sources of income.

In developed economies, wages frequently represent 70 to 80 per cent of household income in households with at least one member of working age.

In emerging and developing economies, where self-employment is more frequent, the contribution of wages to household income is usually smaller, ranging from about 50 to 60 per cent in Mexico, the Russian Federation, Argentina, Brazil and Chile to about 40 per cent in Peru, or 30 per cent in Viet Nam.

“In many countries, inequality starts in the labour market, and particularly in the distribution of wages and employment,” said Rosalia Vazquez-Alvarez, econometrician and wage specialist at the ILO, also an author of the report.

Recent inequality trends have been mixed, but in a majority of countries where inequality has increased, such as in the United States or in Spain, changes in wages and employment have been the dominant force.

However where inequality has been reduced, as in Brazil, Argentina and the Russian Federation, wages and increased employment have been a driving force in reducing inequality.

The report shows that women, migrants and workers in the informal economy suffer from adverse wage gaps that cannot be explained by observable characteristics, like education or experience, which should normally explain wage differences across individuals. These wage gaps between different groups of workers also contribute to overall inequality.

“Wage stagnation must be addressed as a matter of fairness and of economic growth,” said Polaski. “And because overall inequality is driven significantly by wage inequality, labour market policies are needed to address it.”

“While fiscal redistribution mechanisms, including taxes and social protection policies are also part of the solution,” she added, “they cannot bear the full burden of addressing inequality. A comprehensive strategy will include minimum wage policies, strengthened collective bargaining, elimination of discrimination against vulnerable groups, as well as progressive taxation polices and adequate social protection systems.”

“Better support for firms in the real economy, especially small and medium enterprises, is also needed to allow them to grow and create jobs. Many countries can do more to make credit available to them and to streamline business creation,” said Polaski.

Coordinated strategies are also needed at the international level, the report says.

If many countries try to increase exports by repressing wages or reducing social benefits, the consequences could feed into a serious contraction of output and trade.

Wages in Viet Nam: positive developments but still a long way ahead

Wage growth in Viet Nam has been significant over the past two years but there is still a long way for the country to catch up with the world.

As Asia and the Pacific continued to outperform most of the globe, Viet Nam also recorded an overall increase of 13.67 per cent in average real wages between 2011 and 2013 . The growth was driven partly by substantial increases in minimum wages.

Despite the overall positive developments, wages in Viet Nam remain much lower than in developed economies and even lag behind compared to many neighbouring countries.

“These large wage differences between ASEAN countries reflect substantial differences in a number of factors including labour productivity,” said Gyorgy Sziraczki, ILO Director in Viet Nam. “As countries adopt new technologies, invest in infrastructure, encourage structural reforms and improve the skills of their workforce, they lay the foundations for enterprises to become more efficient – and to move into higher value-added activities.”

According to the Labour Force Survey 2013, the highest wage sector was “financial intermediation, banking and insurance” where a worker earned on average VND7.23 million ($344) a month. Other top sectors included “technological, scientific and specialized activities” (VND6.53 million or $311) and “real estate activities” (VND6.4 million or $305).

Meanwhile, “activities of domestic hired workers in households which produce products and services consumed by themselves” received the smallest monthly wage of VND2.35 million ($112), followed by “agriculture, forestry and fishery” sector with the average wage of VND2.63 million ($125).

Overall gender pay gap in Viet Nam is only a bit less than 10 per cent – quite small compared to the world. However, it is extensive in the low-wage sector of “agriculture, forestry and fishery” where women earn 32 per cent less than men (the widest gap).

In the booming manufacturing sector, which is dominated by women, female workers also receive average monthly wages 17 per cent lower than men.

On contrary, in the top two high-wage sectors (“financial intermediation, banking and insurance” and “technologies and sciences”), female workers are paid slightly more than their male colleagues (3.4 and 1.4 per cent, respectively).

Although wage workers now account for 34.8 per cent of the total employed people in Viet Nam, much lower than the world’s average of over 50 percent, but this share is projected to grow rapidly in the coming decades.

“With the growing role of wages, strong wage setting policies and institutions where both minimum wages and collective bargaining could well complement each other are a prerequisite to maximize the benefits from regional and global economic integration and ensure that these benefits will translate into higher wages and better working conditions,” said the head of ILO Viet Nam. 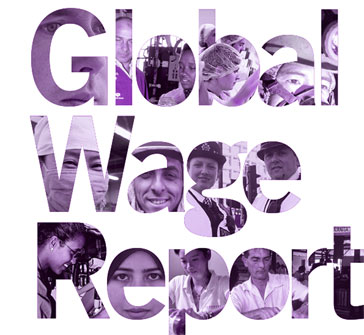